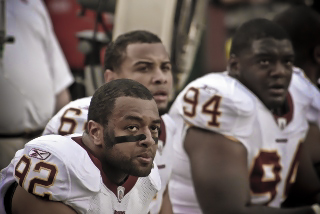 The fifth and final preseason game is in the books, which means it’s time for another installment of Homer McFanboy’s Redskins playlist. As always, here are five songs inspired by the Redskins most recent game.

Let’s start with a little back story. Redskins defensive coordinator Greg Blache doesn’t talk much, but when he does, you’d be wise to listen. Otherwise you just might miss a highly enjoyable quote like this — “Rookies are fine and dandy, and I’m glad to see them progressing,” said Blache. “But I don’t fall in love with rookies. You’re better to fall in love with a stripper than a rookie, because they’ll break your heart. They really will. We will give them some time and let them prove themselves if they are worthy of it.”

Blache might have made that comment a couple weeks ago, but it definitely applied Thursday night. Rookie wide out Devin Thomas earned the ire of head coach Jim Zorn for his play against the Jaguars, with the coaching specifically mentioning the Jason Campbell interception and a catch Thomas made on third down, where he failed to get the first down. On top of that, fellow rookie receiver Malcolm Kelly was AWOL after warm-ups, when he apparently aggravated the knee injury that has sidelined him all preseason. So when it comes to rookies (and possibly even strippers), it’s safe to say Blache speaks from experience.

This modern take on one of the best songs ever goes out to Gregg Williams, who looked completely out of place sporting Jaguars colors at FedEx Field last night. When I saw former ‘Skins safety Pierson Prioleau, who followed Williams to Jacksonville this past offseason, I said “You just don’t look right in those colors, man.” He laughed and said most everyone he talked to told him the same thing. Nothing against Jim Zorn, who may very well have some bright days ahead of him as a head coach, but this should be Gregg Williams’ team. I know it, you know it, and the players damn sure believe it.

To the bushleague “fans” in attendance last night at FedEx Field who felt it was appropriate to start “the wave” during the fourth quarter when the hometown offense had the ball.

I understand that the game was not the most exciting NFL game of all time and that the Redskins looked pitiful for large stretches. I also understand that it’s the preseason and the game was on a weeknight, so a lot of the true Redskins fans opted to sell the tickets and save their energy for games that actually matter. But anyone who knows me knows by now that I’d ban “the wave” and gladly throw out anyone caught doing it at a sporting event. That’s no secret. So to see this be the way locals fans chose to carry themselves while spotlighted on a national broadcast … well … let’s just say I died a little inside.

To my 22 fallen homies, who won’t be on the team this time next week. When breaking down the roster, one could make a case for guys like linebacker Alfred Fincher, running back Marcus Mason or wide out Billy McMullen to make the 53-man roster. But at the end of the day, we have no idea how the scenario will unfold and which route the front office will decide to go.

To tight end Chris Cooley, for kindly stepping up and helping Chief Zee recovering his missing tomahawk. It’s funny that only a few hours after Cooley posts on his blog that whoever returns the tomahawk will earn themselves a free autographed jersey, some drunk guy who walked off with it suddenly grows a conscience and returns the stolen merchandise. Either way, thanks to Captain Chaos for restoring order in the universe.