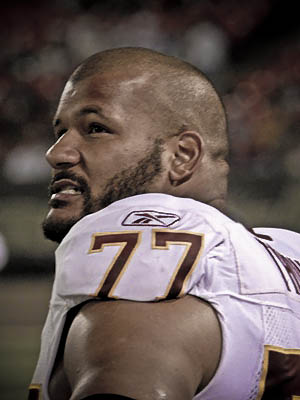 Momma told me there’d be days like this. Doesn’t make it any easier to stomach though. Here’s this week’s playlist, inspired by the Washington Redskins-Carolina Panthers “game.”

This goes out to quarterback Jason Campbell, who was sacked four times in one half of action. Sure, the scouting report on Campbell says he holds the ball too long at times, but if we’re being honest here, the offensive line looked overmatched pretty much from the coin toss on.

Clearly this song was playing on a continuous loop whenever the ‘Skins defense took the field Saturday night. Nothing was working, whether the starters or backups were in, as evident by the 228 yards rushing they allowed on the night. Hopefully, every time they close their eyes and try to go to sleep this week the defensive players will be treated to visions of the 60-yard run by Panthers running back DeAngelo Williams and the 50-yard score by Daily Show host Jon Stewart.

Adding insult to injury (or maybe in this case it’s injury to insult) defensive end Jason Taylor managed to sprain his knee after getting tangled up in one of the few plays the ‘Skins defense stopped the Panthers ground game. Anyone watching not only McDreamy, but his teammates’ reactions thought this injury was a bad one. Thankfully, it looks like Taylor will only be out two weeks.

This classic goes out to Redskins punter Derrick Frost, who unleashed a 64-yard punt when forced into action in his own endzone. There wasn’t much to be happy about in Carolina, so this will have to serve as the closest thing to a highlight the Redskins can walk away with. And as the title suggests, if I ruled the world, Frosty would be the ‘Skins punter this season.

This one goes out to Redskins fan Tom Cruise. Yes, I know he was at last week’s Jets game and not in Carolina, but I needed a distraction after watching my favorite football team get their lunch money taken, so I took the wife out to see Tropic Thunder. Not only was the movie better than either of us could have reasonably expected, but Cruise stole the show. Fellow ‘Skins fan Matthew McConaughey is also enjoyable in the movie, and come to think of it, we even got a Kid Rock music video featuring diehard Redskins fan Dale Earnhardt Jr. before the movie started. So I guess Redskins Nation had a stronger showing than the team this weekend. Let’s not make a habit of that, fellas.