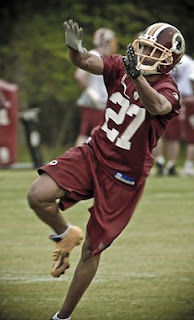 I readily admit that I am not a football expert. When I’m on the sidelines during a game I’m focusing on taking photos and trying to keep up with the flow of the game. I’m not breaking down plays or charting what coverages teams are in or what tendencies the coaches have. I happily leave that to the pros. Instead of attempting to fool folks into believing I know what I’m talking about, I figured we’d be better off turning the blog over to one of the pros. So, I present to you, the one, the only — Fred Smoot.

Here’s what the loquacious cornerback had to say about the Hall of Fame game and anything else that came to mind.

First preseason game is in the books. How you feeling?

“We feeling good – especially as a team,” Smoot said. “Guys came out there and made plays, especially a lot of the young guys. You know, in the NFL you’re only as good as the last person on your roster, so it’s important to have young talent, especially in the backfield. In the defensive backfield we have a lot of young talent.”

What did you see from J.T. Tryon?

“I’ve seen a lot from him since the first day he checked in for training camp,” Smoot said. “He’s gonna be real good. He can return the ball, plus he plays nickel for us. You know it’s gonna take a little while for him to catch on while he develops, but he’s catching on real strong.”

What about Chris Horton?

“Horton? Come on, two sacks,” Smoot said. “He showed he can play around the ball. All of us got things we need to get better at. Him learning in the league how to play the deep third and stuff like that, but I think he’s gonna be a great player.”

Can a veteran player like you get something out of a meaningless preseason game?

“Yeah,” he said. “Any time you come out here on a football field you can learn something new. This game, you never stop learning it. And me, especially early in the season, it’s good for me to get out here and get everything crisp. That’s why me and Shawn [Springs] made sure we came out here and played.”

I’m not going to let you get away with saying you’ve got to watch the game film first. How’d you do tonight?

“I did pretty good, besides dropping that pick,” Smoot said.

I wanted you to bring it up first. What the heck happened?

(Laughs). “You know, I dropped that thing,” Smoot said. “Maybe I was thinking about going a hundred before I caught the ball.”

So you already had the dance picked out and everything?

(Still laughing). “Yeah, you know what I’m saying. I had a dance picked out, but I didn’t make the play,” said Smoot.

That’s the preseason you, right? In the regular season …

“Most definitely,” he said. “I’m gonna make sure I get at least 50 balls after each practice. I can’t be doing that under the lights.”

What’s this we keep hearing about you not passing a conditioning test?

“Don’t believe it,” he said. “Don’t buy into that. It’s just a little joke me and my coaches are playing. I’m one of the best conditioned athletes on this team. Come on. I’m actually 17 lbs. lighter than I was when I checked in last year. I was around 197, now I’m 183. I’m in the best shape of my life.”

We’ll here’s your chance to get even. Tell me how the rookie head coach did in his debut.

“He did well,” said Smoot, declining to fire back at Jim Zorn for selling him out on the conditioning test. “He did well. He showed you a few things out there. The thing about it, I think he did a great job – especially with him being an offensive guru. Come on, I think our quarterbacks probably missed four or five passes out there today, man. Every one of them that got in looked like they’d been there before, even Colt Brennan. It’s his first game and he looked real well. We gotta catch up with the offense. They’re looking real good. On defense, we gotta make sure we ain’t the ones losing games.”

That’s not really something fans should spend too much time worrying about. The ‘Skins defense finished in the top 10 last year, and the addition of Jason “McDreamy” Taylor, as well as players like Carlos Rogers and Rocky McIntosh getting healthy in time for the start of season would suggest the defense has all the tools to be just as dominant in 2008.