redskins made a mistake by not trading away kirk cousins 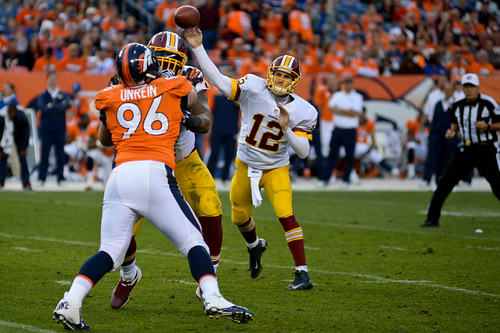 I can’t help but think that the Washington Redskins missed a chance to improve their football team this week, when they failed to pull the trigger on a trade before the deadline.

No, I’m not talking about tight end Fred Davis, who – for reasons that remain unclear – has become a complete afterthought this season.

Sure, he’s a stand-up guy and a football franchise can never have enough depth at quarterback – especially when the starter is coming off of major knee surgery.

And yet, if I was the guy calling the shots at Redskins Park, I would have called the Cleveland Browns every day for the last few weeks until they agreed to a deal involving second-year receiver Josh Gordon coming to town in exchange for Cousins.

Because, for as much of a savior as some ‘Skins fans apparently think Cousins is, his actual body of work since Washington utilized a fourth-round pick in the 2012 draft for him isn’t all that impressive.

Let’s review what he’s done up to this point:

For his career, Cousins has completed 41 of 67 passes (61 percent) for 545 yards with four touchdowns and five interceptions with a quarterback rating of 75.7.

Those stats, over the course of a season, roughly translate to what Carson Palmer is producing in Arizona or Chad Henne has done in Jacksonville this season. His completion percentage would place Cousins around 16th in the league and the quarterback rating would land him at 26th. In other words, simply looking at the numbers, Cousins appears to be serviceable, at best, to this point in his young career.

Should anyone rush to judgment after five brief appearances? Of course not. I’m just suggesting that there is a possibility that Cousins might not actually be the mythical being that a faction of the local fanbase seems convinced he is.

With that in mind, I would have happily dealt Cousins to the quarterback-starved Browns – who were last seen trotting out Jason Campbell (yes, THAT Jason Campbell) at the NFL’s most vital position.

It’s no secret that Cleveland is going through a rebuilding phase. They already dealt running back Trent Richardson to Indianapolis earlier this season and have basically let it be known that other players – including Gordon – are available, if the price is right.

And this is where the Redskins should have done everything within their power to acquire Gordon. Why? Because he’s a playmaker with a skill set the burgundy and gold is desperately lacking. He’s got great hands, always finds ways to get separation from defenders and stretches the field with his uncanny knack for hauling in bombs – even when guys like Campbell or Brandon Weeden are prominently involved.

Up to this point, this might come across as an out of touch blogger caught up in some sort of fantasy football world. I get that. But let me explain why I feel like this is a deal that could of, and more importantly, should have happened.

For starters, the Browns general manager is a guy named Mike Lombardi. Before taking over that position, Lombardi was a regularly writer for NFL.com.

With that in mind, I would like to turn your attention to this particular column Lombardi wrote last December in which he said that Redskins offensive coordinator Kyle Shanahan and Cousins could make for an enticing package for a rebuilding franchise.

“Whenever a coach can take two rookie quarterbacks and produce positive results, he must be given strong consideration. … However, his work with Cousins in last week’s crucial win over the Cleveland Browns has made everyone in the league stand up and notice — especially those teams in dire need of a quarterback and a coach. … Any team that hires Shanahan as its next coach might be able to pry away Cousins for a modest price — considering he was just a fourth-round pick in last April’s draft — addressing two huge problems at once.”

So I don’t think it’s a stretch to say he’s a fan of what he’s seen from Cousins thus far. But wait – there’s more. Here is a link to a mailbag Mary Kay Cabot, of the The Plain Dealer, did back in February.

Hey, Mary Kay: Why isn’t Redskins quarterback Kirk Cousins on the Browns’ radar as possible competition for Brandon Weeden? I think he fits the new offensive scheme. I would think he could be had if the price isn’t too steep.

Hey, Vince: With Robert Griffin III coming off reconstructive knee surgery, there’s no way the Redskins would part with Cousins. It was obvious last season how important it is for teams with dual-threat QBs to have a capable backup. Cousins, the Redskins’ fourth-round pick last April, completed 26 of 37 attempts for 329 yards with two touchdowns and an interception en route to a 38-21 victory over the Browns. Pat Shurmur really liked the former Michigan State product, but the Browns opted for Weeden instead.

Shurmur, it should be noted, was the head coach of the Browns last season. So even if he’s no longer there, for the purpose of this discussion we’ve now got a head coach and a general manager in Cleveland who both like Cousins. Just as importantly, there’s the fact that Griffin and Gordon know each other quite well from their time together at Baylor.

Here we are, a year and a half later and Griffin still desperately needs another go-to option to turn to in this offense. Sure, he’s got receiver Pierre Garcon, rookie tight end Jordan Reed and running back Alfred Morris, but Gordon can stretch the field in a way that mediocre wideouts like Leonard Hankerson and Aldrick Robinson can only dream of –- which is why he’s worth the risk of trading away one of the league’s better backups.

Case in point: since the bye week, here’s the production the Redskins have gotten from their pass catchers over their last three game:

Clearly teams are going out of their way to take away Garcon, which is why Reed has suddenly emerged as RGIII’s new favorite target. But none of the other receivers listed has been able to make themselves relevant this season, which is why no receiver on the roster has visited the endzone more than cornerback DeAngelo Hall, who has three touchdowns through seven games.

So yeah, that’s why I think the Redskins made a mistake by not shipping Cousins off to Cleveland. Even if they had to sweeten the deal with a draft pick in order to land Gordon, it should have been a no brainer. By giving Griffin more dependable options to turn to, you increase his chances of succeeding on Sundays, which in turn helps to keep defenses from teeing off on him like ‘Skins fans saw in the second half of the Denver debacle.

Landing Gordon could have gone a long way towards keeping Griffin healthy and happy. Unfortunately, the current regime was either unwilling or unable to do what was necessary to make this fantasy become a reality.