in search of kickers and quarterbacks 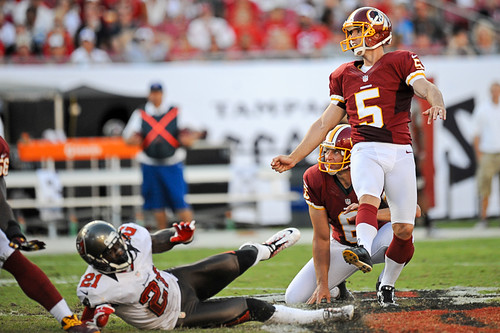 Let’s be honest, the Washington Redskins haven’t been very good over the last two decades.

That because, in large part, the Redskins have lacked anything resembling stability at two of the game’s most vital positions — quarterback and kicker.

When the Redskins won their third and final Super Bowl in ’91, they did so with Mark Rypien at quarterback and Chip Lohmiller at kicker. From the moment those two fine gentlemen walked out the door though, the franchise had little luck finding suitable replacements.

Obviously, optimism is sky high in our nation’s capital these days because of the highly-skilled quarterback who has shown his teammates it’s okay to score more than 15 points a game. But before a young savior by the name of Robert Griffin III came into our lives, the franchise had a revolving door of mediocrity at quarterback.

That’s 20 quarterbacks who started at least one game in between Rypien and Griffin. Seriously, the fact that anyone remained a Redskins fan during such a brutal stretch in the team’s history is simply amazing. And, as the diehards can attest to, the list of kickers who have come and gone during that same span is equally depressing.

*In 2000 alone, the Redskins used a total of five different kickers — Bentley, Conway, Heppner, Husted and Murray. That’s got to be a modern-day record.

Which brings us to the newly-signed Kai Forbath, who will be the 19th kicker Washington has turned to since ’94. It’s worth nothing that no other NFL team has used more than 13 kickers during that time frame.

Forbath was an All-American during his college career at UCLA, which means nothing at the pro level, but gives local fans hope he might finally fill the team’s kicking void. Whether or not that’s the case, of course, remains to be seen.

Should Farbath actually live up to his potential and solidify the position though, it will continue an interesting trend since head coach Mike Shanahan took over the Redskins.

For better or worse, the quarterback and kicker positions have been oddly connected during the Shanahan era. Consider this:

When Shanahan started in ’10, he inherited a roster with two youngsters he was never really sold on (Graham Gano and Jason Campbell).

From there, he turned to established veterans who had built solid resumes elsewhere (Billy Cundiff and Donovan McNabb), but were unable to replicate that level of success in Washington.

Once those two flamed out and forced Shanahan to make yet another switch, he reversed course once again and now is forced to go all in on unproven rookies who looked very good during his college days (Kai Forbath and Robert Griffin III).

Look, I’m not saying the new kicker is a lock to be as talented as RGIII or anything. I’m just pointing out a random trend that has tied the franchise’s two most glaring needs over the last 20 years together.

Griffin has looked as good as advertised since he took his first snap at the NFL level. Shanahan and friends can only hope Forbath is able to do more of the same.