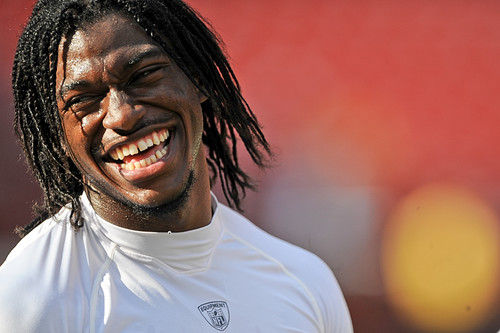 Before the start of each season, I like to put my money where my mouth is and do my best to forecast what’s in store for the Washington Redskins. Sometimes I look like a genius (LaRon Landry won’t reach his potential). Other times … not so much. (President Obama, did not, in fact, attend a Redskins game in ’11.)

But the point of this annual tradition is to take a few swings for the fences. You know, go big or go home. Or something. With that in mind, I present to you my 10 (semi-) bold predictions for the 2012 season.

1. Robert Griffin III will not make the Pro Bowl. This year.

Did you know that since 1988, the Redskins have won the NFC East just twice? Sadly, it’s true.

And what do each of those two seasons (’99 and ’91) have in common? In both years, the Redskins had a Pro Bowl quarterback.

Unfortunately, since Mike Shanahan came to Washington, he’s yet to have a single quarterback who he felt he could stick with for all 16 games. It goes without saying that if your own coach doesn’t want you to play, the rest of the league probably isn’t rushing to crown your ass either.

In 2010, Donovan McNabb got benched in his eighth start. Last season, it took Rex Grossman just five games to play his way out of the starting lineup. And then it took John Beck even less time to force the team to go back to Grossman.

Needless to say, a team without a quarterback is a team without a chance in hell of being competitive. That’s why head coach Shanahan was willing to trade away whatever was necessary to obtain Heisman Trophy winner Robert Griffin III.

Griffin was so great in college that he put an afterthought like Baylor on the map. For his next act, ‘Skins fans are hoping he can do the same for this beleaguered franchise. I believe he will … just not this season.

2. Someone other than London Fletcher will lead the Redskins in tackles.

For five seasons, Fletcher has been the heart and soul of the Washington defense.

He quarterbacks the defense. He never misses a game. And most impressively, he’s leads by example — as evident by the fact he’s led the team in tackles every season since he arrived.

The 24-year-old just seems to have a nose for the football, and the fact that he finished fourth on the team in tackles in ’11 while only starting the final eight games of the year shows me just how much of an impact player he can be.

This defense is designed to keep the middle linebackers free to make plays. In 2012, my money says that Fletcher won’t be the only player taking full advantage of the situation.

In short, the guy isn’t going to be a bust. Garçon might be the latest in a long line of notable receivers to come to town, but where others have failed, I see the fifth-year pro excelling.

Anyone who attended training camp or watched during the preseason saw that RGIII and Garçon have quickly formed a bond. The team’s newest quarterback and receiver might still be getting to know each other, but they look completely in synch on the field.

Garçon has enough speed to beat defenses deep and he just might have the most athleticism of any player on this offense. So basically, as long as Mike and Kyle Shanahan can scheme up ways to best utilize him, Garçon is going to have a very productive year.

4. Niles Paul isn’t the next Shannon Sharpe. Or even Fred Davis.

With quality pass catchers like Garçon, Leonard Hankerson, Santana Moss, Joshua Morgan and Fred Davis on the roster, footballs are going to be tough to come by for those players who struggle to elevate their game.

While it’s no secret the coaching staff is enamored with Paul’s game and more than a few fans have already started drinking the Kool-aid, I’ve yet to see anything yet that suggests Paul is remotely capable of becoming a top-tier talent.

Last season, Paul had a grand total of two catches for 25 yards. During his senior season at Nebraska, he had 39 receptions for 516 yards with one touchdown. Maybe he will one day go on to become an elite tight end. I’m just saying I’ve seen him drop more than his fair share of footballs since being asked to take on a bigger role and I’m thinking that in this case, it might be best for Paul to learn to walk before trying to run.

Last season’s safety duo of LaRon Landry and Oshiomogho Atogwe were established NFL commodities. Both veterans, when healthy, were very solid players who could help a team win football games.

This year, no position on this roster scares me more than the secondary — particularly the two safety positions.

The positions were thin even before Tanard Jackson was suspended indefinitely by the league for a violation of the drug policy. Now, there are five names — Brandon Merriweather, Madieu Williams, Reed Doughty, DeJon Gomes and Jordan Bernstine —  listed at safety, and I’m not sure just how many of them are any good.

Someone better rise to the challenge quickly for Washington, or it isn’t going to matter how many talented pass rushers this team has.

6. RGIII will have more rushing yards than Evan Royster this season.

Look, I like Royster. I think he’s an above average talent. But he’s the unfortunate guy who is currently listed as the starting running back, which might as well be the kiss of death. Shanahan’s dysfunctional relationships with running backs is well documented. He loves them until their first bad outing and then, as Jay-Z once said, “It’s on to the next one.”

Because the Redskins ranked 25th in rushing yards in ’11 and 30th in ’10, Shanahan is desperate to find someone — anyone — who can pick up yards on the ground. So if that means having the gifted passer tuck the ball and run from time to time or turning to Roy Helu Jr. and/or Alfred Morris, so be it.

Or maybe ever again. Even with reports of 20 teams or so calling his agent to express interest, I can’t help but think Cooley is more than happy to take his time while deciding if he wants to continue playing football or if it’s time to change gears and do something new with his life.

For the first time in his adult life, Cooley gets to call the shots and if that leads to making more pottery rather than learning a new offense, I think he’s more than comfortable doing so.

8. Jim Haslett, not Mike Shanahan, is on the hot seat.

Hey Jim, look over your shoulder. See that guy standing over there. His name is Raheem Morris. And he’s going to be your eventual replacement.

9. Richard Crawford is the real deal.

With apologies to Morris or even his college teammate, Josh LeRibeus, Crawford is the rookie not named Robert Griffin III who I’d put smart money on to have the biggest impact in 2012.

Yes, he had two interceptions in his first week of training camp and yes, he had two more during the preseason. But what I love most about the seventh-round pick is that he’s a perfectionist, so rather than be content with having such a strong start, he’s much more interested in finding ways to improve his game.

He might not have a catchy name and he might have been the 213th player selected in this year’s draft, but it’s only a matter of time before the Southern Methodist product begins to win over the locals with his ball hawking abilities and his strong work ethic.

10. Ryan Kerrigan will finally take a play off.

Okay, this one isn’t really much of a stretch. I admit it. But I just can’t see Kerrigan playing every single defensive snap for a second-consecutive season. In fact, I don’t really see anyone on the defense who will be able to achieve that feat this season.

This team has more depth than they have since Shanahan and company came to town, so why wouldn’t a guy like Kerrigan deserve a break from time to time? Just as importantly, wouldn’t that help him to stay fresher in the deciding moments of a game?

While it’s nice to be able to say Kerrigan truly was an every-down player, I’m sure he’d be more than happy to come off the field from time to time if it means a more productive year for the Purdue standout.