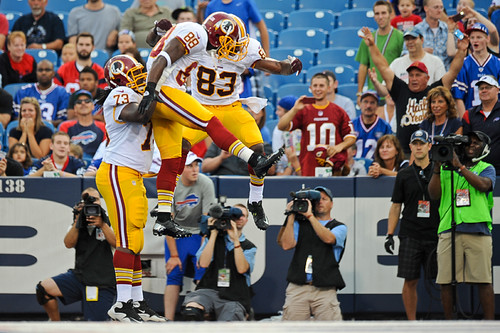 It’s no secret the Washington Redskins have struggled to find consistent production from the quarterback position for roughly two decades. But the franchise has had nearly as much trouble identifying go-to options at the receiver position.

Sure, there’s Santana Moss, who ranks fourth in receptions, fourth in yards and seventh in touchdowns in franchise history, but he’s clearly the exception.

Aside from Moss, the last time a Redskins receiver finished a season with more than 1,000 receiving yards was nearly a decade ago — when Laveranues Coles had 82 catches for 1,204 yards in ’03.

That is why I was more than a little bit skeptical when the team agreed to a five-year, $42.5 million contract with receiver Pierre Garçon this offseason. After all, the 26-year-old has played in all 16 games in a season only once in his four-year career and failed to net 1,000 yards in a season when he was catching passes from Peyton Manning — one of the best to ever play the game.

If he couldn’t put up big-time numbers while catching passes from a first-ballot Hall of Famer, then what reasonable human being would believe he could do so in Washington?

And then I saw Garçon play in person and immediately began to understand why the front office was so big on him. At first glance, the Mount Union product appears to be just another receiver, weighing in at 6-feet and 212 lbs.

But what makes him so special is his freak of nature athleticism. There were several times during training camp, when a quarterback was off the mark on a throw intended for Garçon, and yet, he somehow found a way to go up and reel in the pass in anyway.

This might be why Garçon has quickly emerged as the favorite target for rookie quarterback Robert Griffin III. Even if the pass isn’t perfect, Garçon has shown he’s able to catch pretty much anything remotely close to him. If training camp and two preseason games are any indication, those two will be happily testing defenses all season long.

Garçon’s next chance to impress comes this weekend, when the Redskins host the Indianapolis Colts — a team he’s more than a little familiar with.

Of course, the Colts don’t exactly look like the Colts anymore — not with core players such as Manning, Garçon, running back Joseph Addai, tight end Dallas Clark and center Jeff Saturday all gone.

“It will be strange to see someone other than Peyton there at quarterback,” he said. “But last year I kind of got used to it.”

While Colts fans are excited to see what Andrew Luck can do, receiver Reggie Wayne and pass rusher Dwight Freeney appear to be the only household names remaining from the previous regime in Indy.

“I know Reggie wanted to be there as well,” Garçon said. “Everybody wants to stay there. It’s home. It’s all Reggie knew, it’s all I knew. It was his first option as well, staying in Indianapolis. They love him. He loves Indianapolis. I wasn’t surprised that he went back.”

Rumors surfaced prior to free agency that Manning, Wayne and Garçon might try to force a team to sign all three players in a packaged deal. Garçon said whoever came up with that storyline failed to consult him.

“That was far from the truth,” he said. “It was the offseason, so they needed something to talk about. I guess that’s why that story came up.”

Since coming to Washington, Garçon has been asked more than once to compare and contrast the styles of Manning and Griffin. After all, Redskins fans would be thrilled in RGIII is half as successful as Manning has been throughout his career.

“Both of them are very smart and communicative with their teammates,” he said. “They’re both very good at getting everyone on the same page, which is what you need at the quarterback position. Both have very strong arms and they’re very smart. They’re both able to do a lot of things, but it’s going to take a lot more time for Robert to get to Peyton Manning’s level. It could happen though.”

What do quarterbacks like Manning and Griffin have that so many other quarterbacks don’t? What separates them from their peers?

On a personal note, what’s been the biggest adjustment Garçon has had to make since coming to Washington?

“Just learning the area,” he said. “There’s a lot of traffic in the Virginia area, especially in the morning. There’s a lot less in Indy. Just learning places to eat or hang out at. Getting familiar with the grocery stores, gas prices and all that stuff.”

As far as on the field, what’s been the biggest change?

“Learning the system has been the hardest part,” ﻿Garçon said. “You have to get on the same page and see what they like to do, what they like to run. Adjust to that and get your body and mindset prepared for that. We’re going to do a lot of different stuff [than in Indianapolis].”

What about learning how to play with Griffin as opposed to catching passes from Manning?

Last season, the Colts were dreadful without Manning in the lineup. And yet, Garçon still posted career highs with 70 catches for 947 yards with six touchdowns despite the fact he was catching passes from Curtis Painter, Dan Orlovsky and Kerry Collins.

Assuming Griffin can be more successful than those three mediocre gentlemen, this might finally be the year someone other than Moss proves to be a capable target in Washington. And if that happens, smart money is on Garçon rising to the challenge.