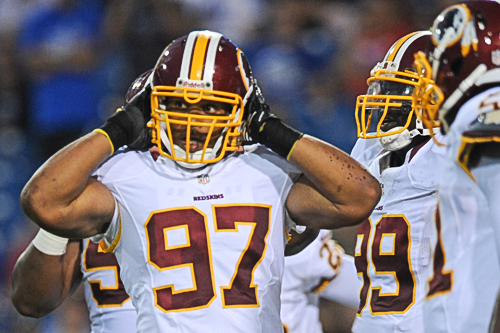 During the preseason opener in Buffalo, I couldn’t help but notice Washington Redskins middle linebacker Lorenzo Alexander putting his hands up to his ears in between plays.

Since the coaching staff wanted Alexander to transition from outside linebacker to the inside this offseason, I chalked it up to him adjusting to the role of quarterbacking the defense. Once the game was over, I wanted to catch up with the 29-year-old to see how the switch was coming along.

How much of an adjustment was it to fill in for London Fletcher as the quarterback of the defense?

“Obviously it’s a huge adjustment because I’ve got to know all of the plays and know how to call it depending on how the offense comes out,” he said. “But it’s good. I just wanted to make sure I could hear everything they were saying to me and get used to hearing that. Especially with the crowd noise and everything, it’s a little bit harder because I’m not used to it. So I just wanted to make sure I got the call clearly so I could relay it to everyone so no one is panicking.”

(Laughs.) “Well, I was trying to get the call out and I guess I was jamming a little bit too,” Alexander said. “It was a lot of fun out there though, because it went so smooth.”

And you must have been doing something right because that goal-line stand you guys put together ended up being the difference against Buffalo.

“That’s why you’ve got to always play until the end,” he said. “It doesn’t matter where they get the ball. Our goal at that point was to keep them out of the end zone and make them kick a field goal. That’s our mindset. The defensive line had a great surge, the linebackers were flying around and that’s when you make good plays. We were able to hold them out of the end zone and no field goal in this league is a chip shot.

“We had a lot of young guys get lots of reps and it’s really creating a good depth defensively,” Alexander added.

I’m interested to get your take on rookie linebacker Keenan Robinson. He’s someone who I think could become a quality player in this system and I noticed throughout the game that you were working very closely with him. What have you seen from him so far?

“He’s a great, young kid and another great draft pick,” he said. “He’s very humble and a very hard worker. Obviously he has all of the tools athletically, but he’s very smart as well — even though he’s a Texas guy. He’s a great kid who was flying around out there, so I was just trying to tell him what to look for in certain situations and just encouraging him. He’s going to be very good for us.”

Another rookie who is making people take notice is Richard Crawford. The kid had two interceptions in his first week of training camp and then picked off another one against the Bills. What have we learned about this late-round pick so far?

“He’s got great skills and great awareness,” Alexander said. “He knows where the ball is and is able to go up and get it. Those are the type of players you’ve got to have on your team. He’s another guys that shows they’re doing a great job of bringing in people who are humble and want to work. Those are the kind of young players you want to have coming in.”

I hear what you’re saying, but he’s a seventh-round draft pick. Those guys aren’t supposed to show up and start making plays this quickly …

“Yeah, they are,” he said. “It doesn’t matter where you’re picked. I’m an undrafted guy, so I’m not supposed to be in the league for eight years. It’s not where you start, it’s where you finish. In this league, if you get drafted or get a chance to play, that means the coaches feel you can play. So it’s all about what you make of that opportunity. Obviously a later-round pick has a harder time getting in the door, but if you go out there and flash like he has, you’re going to work you way into the rotation.”

Now that you’ve gotten a chance to try out this new role, is it something you want to do more of?

“Oh yeah, I love it,” Alexander said. “I want to be in there as much as possible. London obviously knows it. My job is to build my skill set and knowledge of the game so that if he or Perry [Riley] ever go down, I can step in and there’s no drop off.”

How much weight did you drop this offseason? You look noticeably slimmer compared to last year.

“Yeah, I lost about 20-25 lbs.,” he said. “I knew I was moving to insider ‘backer and knew I’d be having to run all the way down the field and there are so many athletic tight ends in this league now — being able to run with those guys or cover receivers — I wanted to lose that weight so I could keep up with them and run longer. The game is definitely changing. People are getting away from I formation and trying to run the ball down your throat. Now, you’ve got a lot of people trying to spread you out and you’ve got to be able to run with these guys.”

How much have you lost total since those early days?

I know math can be tough. Do you want me to ask a Texas guy for you?

And because Alexander is such a nice guy, he didn’t even feel the need to kick my ass after taking a cheap shot like that.