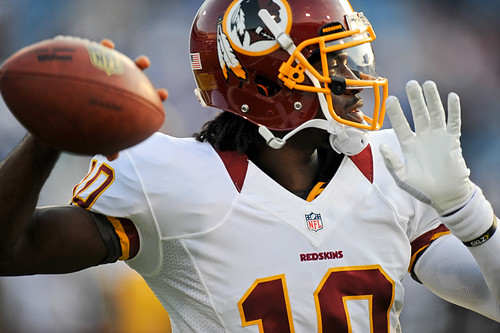 1. “Do You Remember” by Jack Johnson

It’s only fitting that Washington’s 2012 season begins against the Buffalo Bills. After all, the ’11 campaign effectively ended when the Redskins were embarrassed by the Bills 23-0 north of the border.

Although Washington still had two months left of football remaining on the schedule, that humiliating blowout showed just how far the burgundy and gold had to go in their ongoing quest towards respectability.

Not only was the team’s backup plan — quarterback John Beck — not a viable option, but the fact that the humbling loss came at the hands of such a mediocre opponent* only reenforced just how bad the Redskins truly were.

*After defeating the Redskins, Buffalo went on to lose seven of their final eight games of 2011.

The good news is, since last we saw these two teams, the Redskins have undergone a pretty serious facelift. No longer are local fans subjected to the Rex Grossman-John Beck “pupu platter” — not after the franchise traded away a bevy of high draft picks for the right to select Heisman Trophy winner Robert Griffin III.

In his preseason debut, RGIII did everything asked of him in limited action. Griffin, who was in the game for roughly 14 plays, completed four of six passes for 70 yards with a 20-yard touchdown pass to receiver Pierre Garcon.

While the first two series of the night for Washington weren’t great and Griffin was credited with a fumble on a botched handoff attempt with running back Evan Royster, the Baylor standout completed his final three passes for 58 yards and put points on the board against Buffalo — something the Redskins obviously couldn’t do last season.

“It was fun to get out there and run around, suit up in the Redskins gear for the first time officially,” he said. “It’s something I don’t want to forget.”

While it wasn’t perfect, the first preseason game was good enough for Griffin.

“It felt extremely good to come out [and play],” Griffin said. “Coach did a good job calling plays, got me in rhythm and helped get the offense in rhythm on that third drive. And that’s what it’s all about. You don’t always have to go out and try to put together the best scheme to the one play to the one route that’s going to be wide open. Sometimes you have got to go out and out-execute the team.”

2. “Hold On” by Alabama Shakes

Aside from the debut of the new face of the franchise, the biggest moment of the night came when Washington’s defensive backups put together an impressive goal-line stand against Tyler Thigpen and Buffalo’s reserves.

The Bills had six chances from inside the Redskins’ 10-yard line and simply could not win the battle in the trenches and put the ball in the endzone. As if that wasn’t bad enough, Buffalo then proceeded to miss a 22-yard field goal attempt, which was ultimately the difference in the Redskins’ 7-6 win.

“I think that was amazing,” said defensive end Stephen Bowen. “That’s what we need — no drop-off on defense at any position. That’s what’s going to get it done for us this season. When an offense is that close and can’t score, that’s just demoralizing to them.”

Since training camp started, the best rookie not named Robert Griffin III has been defensive back Richard Crawford.

The little-known seventh-round draft pick out of SMU caught people’s attention with two interceptions in his first week of camp and then did it again in the preseason opener — picking off Thigpen with an over-the-shoulder catch and returning it 16 yards.

Crawford’s interception alone would have been cause for celebration with ‘Skins fans, but the fact that it came right after rookie quarterback Kirk Cousins threw an interception of his own made it that much sweeter.

His timely play killed any chance of the Bills gaining momentum and effectively ensured that the burgundy and gold remained in control for the duration of the evening. Not bad for the 213th pick in the draft.

“It’s good just to get the nerves out, just to realize that you can play everybody else,” Crawford said. “Just gaining confidence, and that’s pretty much what I did tonight.”

When people talk about the Redskins’ running back position, it’s commonly viewed as a three-horse race. There’s the veteran back, in Tim Hightower. There’s the local product, in Evan Royster. And there’s the homerun threat, in Roy Helu Jr.

Well, rookie Alfred Morris plans on forcing his way into that discussion.

With 54 yards on 15 carries against the Bills, Morris did everything that was asked of him — taking the ball, making one cut and then getting upfield.

No frills. Nothing flashy. Just tuck the ball and go.

While the second half of this game was tough to watch for the most part, Morris ran with a purpose. That purpose, of course, was to show his coaches and teammates that he believes it’s only a matter of time before he’s going to make it a four-player competition at running back.

5. “How It Starts” by The Features

The other Redskins rookie quarterback, fourth-round pick Kirk Cousins, had a much more uneven outing than Griffin did.

The Michigan State standout completed nine of 22 passes for 74 yards with an interception, but one good thing did come out of his extended playing time — Cousins seemed to bond with newly-acquired receiver Joshua Morgan during their time working together.

Morgan had a team-high four receptions for 49 yards and became a security blanket, of sorts, for Cousins as the game went on.

“He has some of the best hands on the team and he makes a lot of tough catches,” Cousins said of Morgan. “He’s an experienced player who has accomplished things in this league and I had great confidence in him.

“It really builds confidence in a guy when you know you can put it in the general vicinity of a guy and he’ll come down with it,” Cousins added.