getting to know kirk cousins 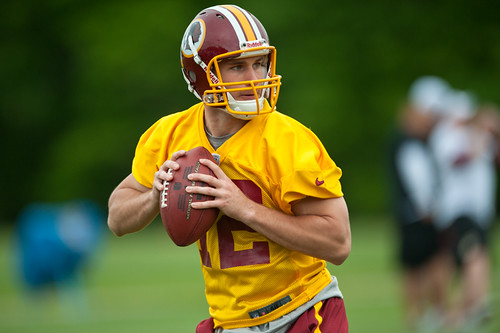 The Washington Redskins announced the signing of rookie quarterback Kirk Cousins, who the team selected in the fourth round of the 2012 NFL Draft (102nd overall), Thursday morning.

At 6-foot-3 and 214 lbs., Cousins looks like a prototypical quarterback. Of course, that didn’t stop many of the so-called experts from openly questioning Washington’s decision to select the Michigan State standout because the team had already landed Heisman Trophy winner, Robert Griffin III.

The Redskins weren’t nearly as concerned with conventional wisdom, so they happily grabbed the 23-year-old who was a three-year team captain. And if you forget RGIII for a minute, it’s not tough to see where the team was coming from — with Cousins completing 64 percent of his passes while throwing for 9,131 yards with 66 touchdowns and a quarterback rating of 146.08 (both are school records) during his stellar college career.

I had the chance to chat with Cousins yesterday about the new contract, his transition to the pros and more. Here’s what he had to say:

“I think it was just important for me to get it done as soon as possible and get going on what’s most important, which is learning this offense and being ready to play come the preseason,” Cousins said. “Certainly it’s another step in becoming an NFL player. I’ve never signed a professional contract before, so I guess it’s another step in the process of a long dream of becoming an NFL quarterback.”

How is everything coming along as you dive into the playbook and learn this new offense?

“I’m trying to take it day by day,” he said. “It doesn’t happen all at once. It reminds me quite a bit of my freshman year of college. It takes a while to get to where you’re not really having to think and you’re just playing and reacting. But every day I’m taking another step forward and I’ve got to stay patient and understand that it’s going to take time to learn this offense.”

Do you feel like it’s easier to learn everything that’s being thrown at you considering the bulk of the spotlight is focused on the other newly-acquired quarterback?

What are some of the biggest challenges you’ve faced as you’re trying to master Mike Shanahan’s offense?

“I think football is football, so a lot of these things I did do in college,” he said. “But there’s a new way of saying it and a new language we have to speak — a different way to say the same thing. And obviously you’re going to get coached on the fundamentals differently with every coach you work with. There are some old habits I have to forget about some new habits I have to work on.”

What are some of those old habits you’re talking about?

“Like my progressions and how I read a specific play might change, even if it’s the same play I ran in college,” Cousins said. “The footwork is certainly different because aspects of my footwork are going to be stressed differently here from Michigan State. I like the coaching so far though. I think it’s all been very good and it’s neat when they bring up a coaching point and then show it being done in a game on a Sunday by Tom Brady or Matt Schaub or Peyton Manning. You can see why it works and how it can help me moving forward.”

What kind of timeline are you on as you try to learn everything they’re throwing at you right now?

“I think I do need to push myself each and every day to spend extra time studying and to go home at night and draw up the plays over and over again,” he said. “Because what I need is repetitions. I’m going to get so many at practice, but off the practice field I need to make mental reps count and I have to be in my notebook and draw up the plays over and over so I get to a point where I’m not thinking and it’s just a reaction. That’s when I can start to play fast. I’m not there yet, but the sooner I get there, the better I can play.”

How much of an adjustment has it been to go from Michigan State, where you’re the top guy and you’re getting all of the snaps, to Washington, where that’s clearly not the case?

“Well, certainly there is a difference from being a fifth-year senior at a place that’s become familiar to you and now coming to a new offense with new people and new coaches. There’s a lot of change there, but as a freshman I wasn’t the big, heralded recruit. I wasn’t the guy getting a lot of reps. I wasn’t the guy that everyone was talking about as the future quarterback, so all of this reminds me of my freshman year of college. It’s something that I’ve been through before and I’m certainly drawing on that experience to have a great rookie year.”

If you want to know why the Redskins would even consider drafting Cousins and the possible controversy that comes with selecting multiple rookie quarterbacks, just go back and read his answer to that last question. This young man is extremely mature and is the ultimate team player. Obviously he wants to be a starting quarterback in the NFL, but he’s not pouting or whining. He’s simply doing everything in his power to be ready if/when his team needs him.

This is my eighth season covering the Redskins and at no point during that time frame has this franchise had anything resembling depth. So if Cousins was sitting there in the fourth round and he was clearly rated higher than anyone else available, why wouldn’t the team select him?

Best-case scenario, Cousins plays out the season as the team’s third-string quarterback and then a year or two from now replaces the erratic Rex Grossman as Washington’s primary backup. And if Griffin gets injured or struggles for whatever reason, there’s another highly-skilled player in the mix to step in and run this offense.

Seriously, how is that a bad thing?