getting to know alfred morris 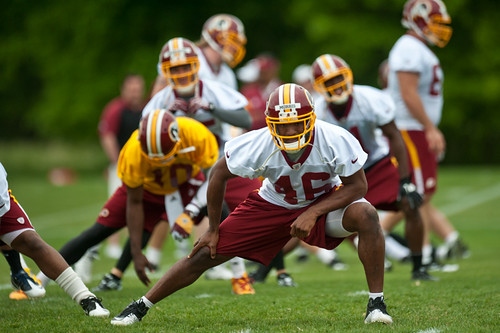 I’m fairly confident that I don’t know a single person who has ever made it a point to sit down and watch the Senior Bowl in it’s entirety. And that’s a shame, because it’s become a bit of a pipeline for the Washington Redskins over the last two seasons.

One year later, the Redskins were at it again — taking three more players from the Senior Bowl. This time around, they selected quarterback Kirk Cousins, linebacker Keenan Robinson and running back Alfred Morris.

For those who aren’t very good at math, that’s nine players in two seasons. Clearly Shanahan sees value in this glorified all-star game.

“Yeah, it really helped us a lot,” Shanahan said of the Senior Bowl. “Any time you’ve got a football team, you get the chance to be around your squad and to be around those players a whole week and get to know them, and also getting to be around other squad for a day. You don’t get to practice with them, but you get to be around them in a different type of environment, that was special for us.”

Out of those nine draft picks, the least known player of the bunch would be Morris. I caught up with him recently to talk about his style of play, growing up a Redskins fan and Shanahan’s track record of turning unknown running backs into stars.

“I’m Alfred Morris and I’m a tough son of a gun,” he said with a smile. “I love contact, so I’m not your typical type of running back.  I love hitting people, but that’s probably the old linebacker in me. I’m going to give it my all, no matter if it’s practice or on gameday.”

Okay, that’s how you make a strong first impression with the locals. What was your initial reaction when you learned you’d been drafted by the Redskins?

“I was shocked,” Morris said. “It was kind of surreal because I’m actually a Washington Redskins fan, so I never in a million years thought they would be the ones calling me on draft day. It was definitely a great feeling and I’m definitely going to do everything I can to make this dream come true.”

How nerve-wracking is the entire draft process for a player who is just stuck there waiting for his phone to ring?

“It’s very nerve-wracking because, at first, you’re just excited,” he said. “But the longer you wait, you start to wonder if a call is ever going to come. You start to get anxious a little bit. You get nervous. And then you just try to do things to take your mind off it. You’re just checking your phone every couple of seconds, and I’m glad it’s over. It was a long, long process that started back in December with training and the all-star games. To finally get that call, it was just a big sigh of relief.”

Was it even possible as a Redskins fan to monitor how the team was doing during the draft or were you simply too consumed with the waiting game to expend energy following how their draft was going?

“No, I wasn’t able to. I was so focused on waiting for that call to come in that I wasn’t able to do anything else,” Morris said. “I already knew they were going to get Robert Griffin — that was a given. But I wasn’t able to look at the other draft picks until after everything was over. Then I was able to see who else was coming with me.”

That makes sense. You said you’ve been a fan of the ‘Skins for a while now. Which players were your favorites growing up?

*Fact: I’ve never felt older than when I stood in front of 23-year-old Morris as he told me his favorite player growing up was Portis.

Since you participated in the Senior Bowl this year, I’m curious to know what, if any, interaction you had with Mike Shanahan during that entire process.

“Before the Senior Bowl, I thought he might talk to us more,” Morris said. “But he was really quiet. He was walked around and observed everything the whole time. It was kind of weird. I mean, he’d crack a smile every now and then, but other than that, he never really said much.”

Since you said the majority of your draft day experience involved waiting for your phone to ring, can you tell me what that phone call was like?

“‘He said, ‘This is Mike Shanahan, welcome to the Redskins,'” he said. “I was like, wow! It kind of floored me but I was excited. I told him thank you, thank you and ended up talking to [running backs] coach [Bobby] Turner.”

Shanahan has a history of taking unheralded running backs and making them household names. I would imagine that’s pretty exciting for a guy in your shoes, right?

“Yes sir, it definitely is,” Morris said. “He saw something in me that others didn’t. He’s taking a chance on me and I definitely don’t want to disappoint him.”

Other than the fact that Morris apparently enjoys making me feel old, he comes across as an extremely likeable and down-to-earth player. It’s clear after talking to him for any length of time that — between growing up a Redskins fan and playing for a coach who has a history of getting the most out of running backs — Morris feels like he’s landed in the perfect situation.

He’s not concerned with a crowded backfield that includes Roy Helu Jr., Evan Royster and Tim Hightower. He just wants to get the most out of these early rookie camp and OTA practices so he can put himself in the best possible position to help his team win.

If you can’t root for a guy like that, then I’m not sure why you’re a sports fan.