time for caps to admit they have a problem 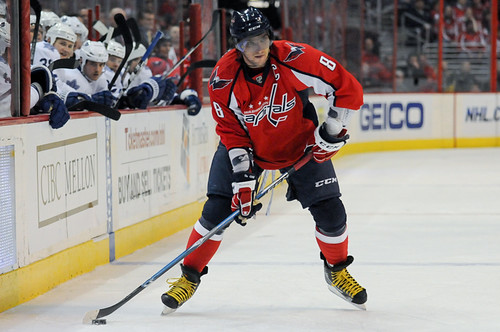 Anyone who has read my thoughts on the Washington Capitals this season should know by now that I’m convinced this team is critically flawed.

This roster, as presently constructed, doesn’t appear capable of coexisting with the system Dale Hunter wants to utilize. So what Caps fans are “treated” to most nights is uneven play in which the rink looks completely tilted against Washington.

The Capitals end up getting out-shot and out-worked seemingly every time they take the ice. They rarely turn up the pressure on their opponent, so quality scoring chances and powerplays* are few and far between.

For at least 20 minutes every game, the players look completely disinterested as they go through the motions shift after uninspired shift.

*Although, to be fair, the team’s powerplay is horrid. They need a four minute five-on-three man advantage just to get enough of a sustained attack on a goalie to make him sweat. So I’m halfway convinced that referees have stopped calling penalties against Washington’s opponents in hopes of preventing further embarrassment. But I digress.

That this has been farce has been allowed to continue all season long is a slap in the face to anyone who actually cares about this team.

As I wrote last week, it’s clear that the window has closed on these Capitals. Anyone who believes these players are capable of winning a championship is clearly delusional.

Even with Alex Ovechkin, Nicklas Backstrom and Mike Green all healthy and motivated (which apparently is easier said than done), the Caps still aren’t best suited to roll up their sleeves and get their hands dirty the way Hunter wants them to.

The best outcome anyone can reasonably hope for this season is for the Capitals to make the playoffs and then get bounced after a round or two.

You know, like they did each of the previous four seasons under that coach who wasn’t good enough to keep around anymore.

At this point, I’m actually hoping the Caps continue to perform as they’ve done the last 50 games.

If that happens, there’s little doubt that Washington will miss the playoffs for the first time in recent history, and maybe – just maybe – that’ll be enough for general manager George McPhee to finally admit this team has a problem.

That’s Step 1, right? Admitting you have a problem. Only then can you actually begin to fix the situation and get this franchise back to relevance.

Until then, I guess Caps fans are left watching a team that excels at nothing remotely positive. But as long as the Verizon Center is sold out, everything is just peachy, right?

And honestly, there are probably more than a few Caps fans out there who are going to have trouble understanding where I’m coming from.

They’re going to take a look around the D.C. sports landscape and point out that only one team in this town has been remotely competitive in recent history, and wonder why I’m so cranky about them.

But that thought process only strengthens my stance.

Because I’m a Redskins fan and I’ve watched as ‘Skins fans year in and year out try to convince themselves that “this year is different,” which is code for the Redskins being anything other than a laughingstock.

For nearly 20 years, the Redskins have tried to slap a band-aid on the problem rather than actually addressing the elephant in the room.

They’ve tried to take shortcuts and throw money at problems rather than doing what professionally run organizations do – namely building a team to be competitive over a sustained period of time rather than backing into the playoffs once every few years.

The bar is set so low for the local football team that fans would actually rejoice if the Redskins were good enough to finish a season .500.

Simply finishing a season without more losses than wins would be a milestone worthy of throwing a parade for the burgundy and gold.

Is that what we want for the Capitals as well?

For better or worse, that’s where this ship is headed. Through 50 games, the Caps have won 26 games and lost 24 of them.

If the playoffs started today, Ovechkin and friends would have to buy a ticket to get in.

The Capitals are dreadful on the road (8-14-3) this year and have given up more goals than they’ve scored (141 for and 145 against). No matter how you try to spin it, this is a franchise in serious trouble.

The writing is on the wall, the only question remaining is how long it’s going to take for guys like owner Ted Leonsis and McPhee to acknowledge it.

Either they make the controversial decision to overhaul the roster before the trade deadline or they run the risk of further diminishing any potential return they could get on moves down the road.

There’s no way around it – these players aren’t suited for this system. That’s not going to change no matter how many fans say their prayers and eat their vitamins.

So either give Hunter a fighting chance or watch as another talented coach is run out of town and the process starts over yet again.

The Capitals have been the only team in town worth the price of admission for a while now. How much longer that continues to be the case hinges largely on what McPhee does (or doesn’t do) next.