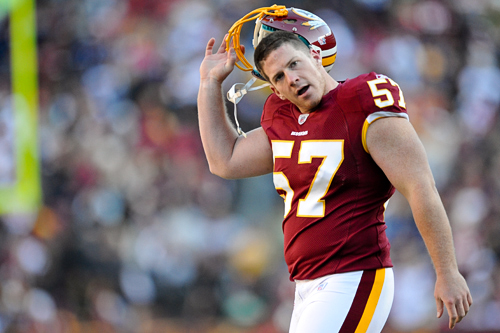 Before the Washington Redskins took on the New England Patriots this past Sunday, long snapper Nick Sundberg rushed out of the entrance tunnel, through the giant inflatable Redskins helmet and out onto the field. No one announced Sundberg’s name over the PA as he took the field. There was no music or pyrotechnics or theatrics of any kind. In fact, hardly anyone in attendance noticed. But that didn’t stop Sundberg from running out of the gate in a crisscross pattern with his arms fully extended out to his sides, enthusiastically mimicking an airplane as he made his grand entrance.

“It’s something I’ve wanted to do for a very long time,” Sundberg said. “Never got to do it in college because kickers, punters, snappers, we always go out early. In the NFL, it’s the same way — we always run around it. I always thought that was kind of weird. The whole team runs through it except for us. We run around it.”

So Sundberg said that one day he was making his way out to the field with kicker Graham Gano and punter Sav Rocca and he decided to just go for it. He tried to get the other two special teams players to go with him, but they wouldn’t do it.

“You know how kickers are with their stupid routines,” he said.

But Sundberg went for it and he had a blast.

“It was like the best time ever. It really gave me a lot of joy,” Sundberg explained.

From that week on, he makes the most out of his entrance at every home game. He eventually convinced Gano to go through the tunnel with him before the game against the New York Jets, but 38-year-old Rocca has steadfastly refused. Sundberg is hoping to convince the punter to join him in his pregame entrance soon, before it’s too late.

“He’s not going to be able to run very much longer in his old age,” joked Sundberg.

However, convincing the punter to participate appears to be an uphill battle. When asked what the chances are he’d ever make a grand entrance alongside his long snapper, Rocca said it’s “never going to happen.”

While Sundberg likes to have fun off the field, it has taken a lot of hard work and dedication for him to make it to the NFL. Growing up in Phoenix, Ariz., Sundberg spent a lot of time outside — camping, fishing and exploring the vast land. He also played everything he could, from soccer to basketball to hockey. His mom was adamant that he try his hand at every sport. Every sport except football, that is.

“My mom didn’t actually want me to play football because she thought it was too dangerous,” Sundberg said. “So she held me out of it as long as she could.”

But the summer before he started high school, a letter arrived from the North Canyon High School football team inviting incoming freshmen out to a summer workout. Being bigger than the other kids and having an athletic background, North Canyon’s coach wanted Sundberg to start as the team’s varsity left tackle his freshman year. Reluctantly, his mom let him go out for the team.

Eventually, he was moved to center. Then, a new offensive line coach came to the team after his sophomore year and convinced Sundberg to become the team’s long snapper. Long snapping was a passion of his new coach, Ben Bernard, and Sundberg soon found himself lifting weights four days a week and snapping the ball five days a week, 150 to 200 balls a day. He says by the end of his senior year, he was good, but not great.

The following summer, he attended a kicking and snapping camp in Las Vegas, Nev., where he impressed the scouts for the University of California, Berkeley, who were looking for a new long snapper after their starter tore his ACL. Sundberg was able to leverage interest from other teams into a full scholarship to Cal.

Making the transition to long snapper was the best thing that could have happened to Sundberg in his mother’s eyes. After having her initial reservations about him playing football, having her son end up a long snapper is great.

“From a mother’s point of view it’s a perfect position,” Stacie Sundberg said in an interview with Redskins.com earlier this year. “They’re only in the game — if it’s a high scoring game — maybe twelve to fifteen times. It’s great to come out and see him play and know that he gets to participate at this level and can have longevity at a position that’s not gonna beat him up too quickly.”

In 2009, Sundberg was signed by the Carolina Panthers as an undrafted free agent. However, he didn’t end up making the team. It was a low point for the long snapper and he had to figure out if he wanted to continue pursuing a NFL career.

“Up until that point, I had never been told, ‘Hey, you’re not the guy,’” Sundberg said.

The rejection was difficult for him to handle. He ended up having lengthy discussions with his mom and Ben Bernard to get his head right. But it took a stint playing for the UFL and even a winter spent working a Christmas tree lot to make extra cash before Sundberg was eventually signed to the Baltimore Ravens practice squad.

“Once I got to Baltimore and I got to see what the NFL was really like for a game, even though I was only on the practice squad, it was a lot of fun,” said Sundberg. “And it really taught me a lot about the game, the business, how things works. Being able to watch everything from the sideline before I ever played was very beneficial.”

But even after making it to the big leagues, he hasn’t forgotten his stint as a Christmas tree salesman.

“It’s bittersweet. I had a lot of fun working those. But I feel like I’m doing better things now,” Sundberg said with a laugh. “Every once in a while when you get those 20 dollar tips, it was worth it.”

In 2010, Sundberg was signed by the Washington Redskins and became the starting long snapper, replacing one of the Redskins longest tenured employees, Ethan Albright. Sundberg has continued to work hard both on the field and in the weight room, where he has impressed strength coaches Chad Englehart and Ray Wright. In fact, after witnessing Redskins special team’s coach Danny Smith yell at Sundberg during a practice, Wright taped Sundberg’s name onto his office door under the other coaches’ names, joking with the long snapper that they would hire him as an “assistant assitant strength coach” if Smith cut him.

As Sundberg continues to work hard and excel as a member of the Redskins, his biggest fan is still his mother, who attends all of his home and away games, even though she still lives in Arizona. Sundberg said that she texts him inspirational messages before every single game and that he still goes for her not just for advice, but “for everything.”

Of course, that doesn’t mean he doesn’t still harbor just a little resentment for his mom letting him get tased when he was nine-years-old. Stacie Sundberg works for TASER and, since her son was nine, he has been testing out the new equipment for her and her coworkers. After the tasing story initially came out earlier this year, Sundberg said his mom told him he told it wrong and that, unlike the original article which made it sound like she quickly caved to her coworkers who were egging Sundberg on to try out the merchandise, he practically begged her to let himself get tased.

“I don’t know if I necessarily believe her,” Sundberg said. “She had to justify it somehow.”

However, he has continued to be a glutton for punishment, allowing himself to get tased by five different models. He says he’s noticed the technological advancements over the years and that the newer models pack more of a punch. In fact, while he has bravely been TASER’s guinea pig since he was nine, Sundberg said he refuses to let them test out the TASER X12 “Less Lethal Shotgun,” which, as the name implies, is a shotgun that can fire off an electrocuting shell up to 100 feet.

“It’s much more powerful when it comes to blunt force. It’s a shotgun shell coming at you,” Sundberg said. “Not only does it deliver the 50,000 volts, but it packs a punch. I’m not ready to get shot with that yet.”

Even with his grand entrances before games and his willingness to get tased, one thing you might not expect about the clean cut Sundberg is that he has a full back tattoo. The tattoo is an elaborate Greek mythology scene, featuring Mt. Olympus, Earth and the Underworld. Sundberg estimates that he’s had about 30 hours worth of work done to it and plans to add at least another 30 hours worth of work this offseason.

“Hopefully when I come back, I won’t have any skin color left on my back,” said Sundberg.

When asked if he had any other idiosyncrasies fans didn’t know about, Sundberg admitted to owning a Toy Story shower curtain and a Buzz Lightyear toothbrush holder in his bathroom. When asked why, he said: “In this business, you want to feel as young as you can.” He said that the Toy Story stuff makes him laugh and makes him feel young. “The women don’t hate it either,” Sundberg added.

While he may have a fun-loving and slightly ridiculous persona, the back tattoo, the Buzz Lightyear merchandise and the pregame entrances still aren’t getting him recognized by fans when he’s out in public. Sundberg said he’s only been recognized in public once when he wasn’t with other teammates and that he was actually skeptical that the fan knew who he was.

“I swear, I was speechless I was like, ‘No way does this guy know who I am,’” Sundberg said. “It was pretty sweet. I’m moving up in the world.”

Of course, it’s not just not getting recognized that he has to deal with. Sundberg also faces another dilemma when he’s out in public discussing his job. Most people don’t actually know what a long snapper is. They aren’t even aware that his position exists.

It’s not always easy being a long snapper. You don’t get the glory or the recognition that a starting quarterback or a high profile linebacker enjoys. You never get your own featured pregame entrance with music and pyrotechnics. But Nick Sundberg is showing that if you work hard and don’t take yourself too seriously, you can have just as much fun as those other guys.

And pyrotechnics and music or not, you can still have your own entrance.