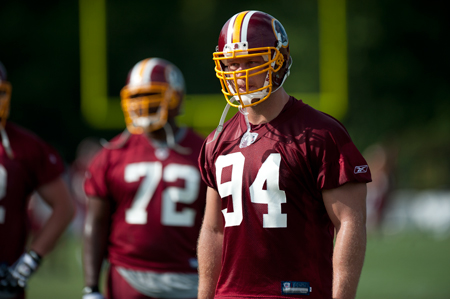 With apologies to the baseball trade deadline and celebrity soccer games, it brings me great joy to be able to turn my attention fully back to the biggest ticket in town – the Washington Redskins.

Over the weekend I had the chance to swing out to Redskins Park and see my first glimpse of the 2011 Redskins, and while many of the names and faces have changed from one year ago, there are still a few familiar characters in the line-up.

While last year’s 6-10 record was nothing to write home about, and the defense in particular was abysmal – finishing second to last in the NFL – there were a few small glimmers of hope.

One in particular for me was the play of defensive end Adam Carriker over the last quarter of the season. While it was clear some guys were content to pack it in and turn their attention to their offseason plans, Carriker’s play only got better the last month of the season.

With that in mind, I had the chance to catch up with the 27-year-old to talk about waiting to come back to work, his thoughts on the team’s draft and saying goodbye to a close friend.

Be honest, how great does it feel to have all of the labor nonsense behind you so that you can finally get back out here on the football field?

“I mean, it feels great,” Carriker said. “It was crazy. One day, someone would say you might have to go back and then the next, you might not. It was tough sitting around and waiting, so it’s nice to be focused back on what’s important.”

What kind of stuff did you do to keep in shape during the lockout?

“I was just working out, running and lifting,” he said. “I’m honestly the strongest I’ve ever been. So I feel good and ready to go.”

That’s good to hear, but I’m starting to think you might have more pull at Redskins Park than anyone could have imagined. First, I see the team use half their draft picks on Nebraska players and then they released your back-up Phillip Daniels. Are you calling the shots now?

“You know, I don’t want Phil to go anywhere,” the Cornhuskers stand-out said. “I was really sad the day they let him go. I think I was the first guy he told because I happened to see him in the hallway and as soon as I left, I called my wife and told her how sad I was because my ‘Bash Brother’ was gone.

“As far as the Nebraska players, it just shows they’re getting smarter in this organization,” he said with a big laugh. “Clearly they know what they’re doing upstairs.”

I don’t know. Daniels was the only guy stronger than you in the weight room, so part of you has to be relieved that he’s gone …

(Laughs.) “Hold on,” Carriker said in a way that clearly let me know I was getting to him. “Who said he was stronger? Just because I don’t post videos of myself on YouTube. I mean, I can do all that stuff, I just don’t post it online.”

Okay, we’ll talk about something a little less controversial. Toward the end of last season, you told me you really felt like a switch had flipped and you were able to start making plays on a more consistent basis. What’s your mindset going into this year?

“Last year, in the beginning I was just trying to learn the defense and was still trying to get situated in the city and within the organization,” he said. “Now, I know where I fit and I don’t have to worry about all of that other stuff. So now I can focus on just getting better and better out there on the field every day.”

Looking around, is it crazy to see such a high turnover rate with players from just one year ago or do you simply chalk that up to life in the NFL?

“It is the way of life in the NFL, but this feels a little different,” Carriker said. “On the first day of camp, it was literally me, Vonnie Holiday (who has since been traded) and Anthony Bryant. Everyone else from the defensive line group is gone though. It definitely feels weird. I mean, we’re getting to know the new guys who just signed and the new guy they brought in, but it might take a little while to feel like a family again.”

Because of the shortened offseason, how important is it for guys like you to lend a hand to the rookies who didn’t get to participate in OTAs, minicamp and all of that usual offseason stuff that helps newbies get acclimated?

“It’s huge,” he said. “Like you said, they didn’t have OTAs, they didn’t have minicamps or any of the stuff I had last year to help my transition. They’ve got to pick it all up in training camp, and the guys like Stephen Bowen and Barry Cofield don’t even get to start practicing until Thursday, so they’ll have missed a week of camp already. The more you can get down mentally before you take the field, the better off you are on the field.”

So what can Redskins fans expect from you this season?

“I’m just going to keep getting better and better,” Carriker said. “Throughout last season, I just felt like I was climbing and climbing, so I’ve got to keep that progress going.”

At that point, we concluded the interview and I began to head off in search of another player to chat with. Only, before I got away, Carriker stopped me and said something.

“Hey man, you don’t really think Phil’s stronger than me, do you,” he asked in a way that clearly showed I had gotten in his head.*

To which I replied, “Honestly, I just wanted to give you a hard time. I have no clue who is actually stronger between you two. If I had Daniels sitting here in front of me I would have told him you were the only guy in the locker room who was stronger than him, just to add some gas on that fire.”

*Just to make sure everyone is on the same page here, Carriker and I are both big fans of Daniels. The three of us have debated who the strongest player in the weight room is ever since Hail! Magazine did the feature stories on Daniels’ powerlifting and Carriker’s love of professional wrestling. Everything said in this interview was in good fun and we both hope the Redskins find a way to get Daniels back in the mix.