redskins are winning offseason once again 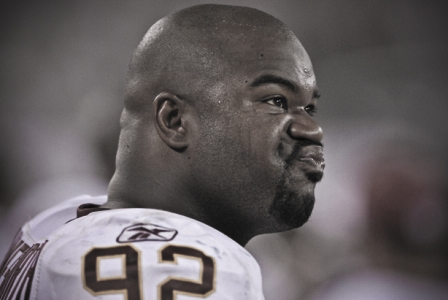 There might be hope for the Washington Redskins after all.

That’s where I’m at as the NFL’s first week of 2011 comes to an end and the Washington lineup continues to take shape.

Sure, there is still plenty of work to do (namely acquiring a quarterback who might even be good enough to be considered mediocre), but the Redskins front office has at least begun the process of pointing this wayward ship in the right direction.

If I was asked before the lockout ended to come up with a to-do list for the Redskins this offseason, it would have looked like this:

As I wrote earlier this week, getting anything of substance – even a pair of sixth rounders – for McNabb has to be viewed as a win for the team after the way Mike and Kyle Shanahan dragged his name through the mud.

The same must be said of Haynesworth, who netted the ‘Skins a fifth rounder in 2013 from the New England Patriots and enabled linebacker Brian Orakpo the opportunity to enjoy a drama-free camp for the first time since coming to Washington.

Seriously, the phrase “addition by subtraction” has never been more applicable in the history of the English language. The front office was never going to allow Haynesworth to choose his own destination – not with the Philadelphia Eagles lurking in the shadows.

So the Redskins had to find a trade partner – and sooner rather than later.*

*In less than a week, veteran players report to camp, and honestly, the thought of another year’s worth of “look at me” sports anchors doing conditioning tests on air in hopes of convincing someone – anyone – that they could actually be an NFL player just made me throw up in my mouth.

The Redskins had to dump Fat Albert’s body and, mercifully, the ego of the man in the hoodie came to the rescue.

Now, before we go any further, I feel obligated to address the nation media’s reaction to the Haynesworth trade.

Look, I get it. The Patriots win Super Bowls, while the Redskins win offseasons. If ever there were two teams who have earned their respective reputations, it’s these two franchises.

But the eagerness pundits have shown to drop to their knees and slurp New England head coach Bill Belichick’s every move is unsettling, to say the least.

Although it might not jive with popular opinion, at least one journalist seems to agree with my stance that folks are getting a little overanxious to rush to praise New England’s decision.

Darin Gantt seemed confused why there was such a “widespread temptation to compliment the emperor on his clothes when he trades for a turd,” and I couldn’t agree more.

Bringing in me-first players such as Haynesworth and Ochocinco is great on paper or in a video game, but has much more potential for disaster in reality. With Tom Brady throwing him passes, I fully expect Ochocinco to be on his best behavior, but Fat Albert is still going to have to play in a 3-4 defense and he’s still going to be a selfish prima donna.

So enjoy, New England. And try not to pay attention when the Redskins’ front office actually volunteers to drive Haynesworth to your doorstep in hopes of keeping him out of another road rage situation between now and his report date.

“I think a lot of the stuff that you see on TV, sometimes it’s only half the truth. I think there’s two sides to each story and I don’t think that Albert is a bad guy,” Warren said.

Half truths, huh? Haynesworth isn’t a bad guy, huh? Warren either chooses to live in a delusional bubble or hasn’t tried to call anyone in the Redskins locker room.

Even if you’re willing to concoct some insane theory about how Haynesworth could possibly be the victim in situations involving groping waitresses, knocking up strippers and/or road rage, you’ve still got to dream up an explanation for this.

By the end, even the most diplomatic of Redskins veterans ran out of ways to explain Fat Albert’s mindset. No one – and I mean no one – wanted him around Redskins Park anymore.

So kudos to Warren for openly believing an entire franchise (and fanbase) is totally off base with being thrilled the guy can no longer bring drama into our lives. I look forward to hearing his thoughts on the subject a year from now.

I’ve already shared my belief that bringing back Moss was the right thing to do and I’m going to try to keep this relatively positive,* so let’s jump ahead to the offensive line.

*Which means I’ll be overlooking the team’s curious decision to acquire every 30-something receiver available during a youth movement.

I’m not exaggerating when I say that I truly believe the front office’s decision to cut center Casey Rabach might be the most popular move since The Danny talked Joe Gibbs out of retirement. While he’s a stand-up guy and an enjoyable interview, he’s also someone who routinely got pushed around.

Forget who will line up at quarterback or running back this season. If the heart of your offensive line is getting blown up every other play, you’re never going to have a consistent offense. There’s still work to be done with the offensive line, but the decision to release Rabach is a step in the right direction.

And rather than focus on the fact that the Redskins quarterback situation very well could be the worst rotation I’ve ever seen in the NFL, I’m going to continue to accentuate the positives:

The Redskins are being fiscally responsible? The front office is working hard to eliminate the kind of off-the-field distractions that sabotaged last season? Attention is finally being given to improving both the offensive and defensive lines?

Seriously, it’s enough to bring tears to my eyes – which is fitting for a season that appears to prominently involve John Beck.