on defense, hannan leads by example 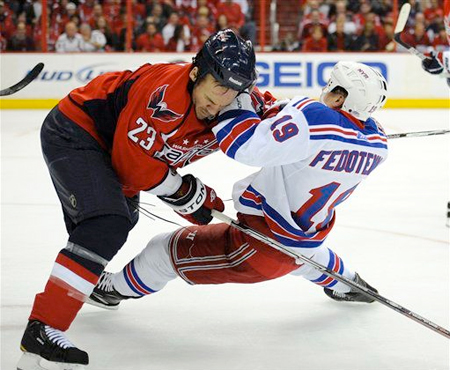 The Washington Capitals suddenly find themselves in the exact postseason scenario everyone in town dreads – with their backs against the proverbial wall.

While the Caps have made a living battling back in the regular season, this roster is far less accomplished this time of year.

Trailing two games to none against their division rival, the Tampa Bay Lightning, Washington needs to string together a couple victories sooner rather than later if this team is going to make some noise this year.

Unlike the New York Rangers in the opening round – a team with very little offensive firepower – the Lightning can trades goals with the best of them.

Guys like Mike Green, Jeff Schultz and John Carlson have had their ups and downs in the playoffs. Some nights they’re steady as a rock. But on their off nights, some of the decision making and execution has been downright cringe-worthy.

Insert Hannan, who has 80 postseason games under his belt – more than twice as many games as any of his teammates on the blue line.

Against the Rangers, Hannan led all Caps defenders in time on the ice – logging more than 36 minutes a night. He’s got more games and more minutes than anyone else, and if anyone can help steady the nerves of a youngster cracking under the pressure of the playoffs, it’s Hannan.

“I’ll do anything I can to help out this team,” Hannan said. “Whether it’s helping out with communication with the younger guys or simply trying to lend my experience any way I can. Whether we’re talking penalty killing or minutes played, those are things that I relish – especially in the playoffs. We’ve got a lot of guys on the back end that log a lot of minutes and a lot of different players who play key roles. I’m just trying to do my part.”

And much like trade-deadline acquisition Jason Arnott, who has no problem speaking up when the moment calls for it, Hannan too is more than happy to sound off and hold players accountable for their actions – himself included.

Which is why Hannan blamed himself for the Lightning’s overtime winner Game 2. Although he had only been on the ice for 33 seconds, Hannan tried to make a change at an inopportune time and it backfired.

“It was a bad change,” he said. “I thought the puck was going in behind. You can’t make mistakes like that. It will cost you in the playoffs. I was a little tired and I thought I could get off in time and obviously I couldn’t. It was a bad play.

“It is frustrating,” Hannan continued. “It goes to show you in the playoffs if you make mistakes it will cost you. I will take the blame for that. I should have stayed on the ice and it would have been a dead play, a 2-on-2.”

Aside from the powerplay, which has been a thorn in the side of coach Bruce Boudreau all season long, the biggest issue the Capitals need to get a handle on is players cutting corners and/or trying to do too much individually.

“I think we’re best when we stick to our gameplan, we battle hard and we assert ourselves,” Hannan said. “That’s how we’re able to close out a team like the Rangers. In that final game, we played a really good game – from the forwards down to the d-men down to the goalie. We stuck to the gameplan and battled hard and were able to close it out.”

Although Hannan has only been in Washington for less than a year, he’s quick to point out just how different this team is now compared to his first day in Washington.

“This team has come a long way,” he said. “For myself, coming in, adjusting to playing with a new team in the Eastern Conference and a totally new style of play in midseason – you don’t often see teams try to do that. But everyone was committed to focusing on defense and playing the right way necessary to win in the playoffs.

“We were in tight battles all year long, and we had our bumps and bruises along the way, but towards the end we really started playing the way we can,” Hannan continued. “We carried that through the first round, and now we’ve got a long road ahead of us.”

Although he’s only been in Washington since November – when he was traded from Colorado for forward Tomas Fleischmann – he’s quickly become indispensable.

“He’s just got so much knowledge and experience,” said defenseman Karl Alzner of Hannan. “He makes sure to let guys know when the do something wrong or right and is always willing to help guys make corrections. He’s not going to call a guy out, but he’ll let them know what they’re doing wrong and that’s what you need.”

For a player like Alzner, playing in his first full NHL season, learning from a similarly defensive-minded defenseman like Hannan is a dream come true.

“He plays a style of game that I really respect,” Alzner said. “He’s one of the best I’ve ever seen at using his body to protect pucks and using a stiff arm to fend guys off. He’s very poised with the puck too, which I find unbelievable. He’s not known as a very offensive guy, but he can do those types of plays. It might surprise some people, but he’s got a very wide skill set when he decides to use it.”

Through seven games this postseason Hannan has just two shots on net. And honestly, I wouldn’t expect that to change much.

But as long as he plays solid in his own end and continues to work with the young guys on doing the same, it’s safe to say his coaches and teammates will happily give him a pass on the offensive side of the game.