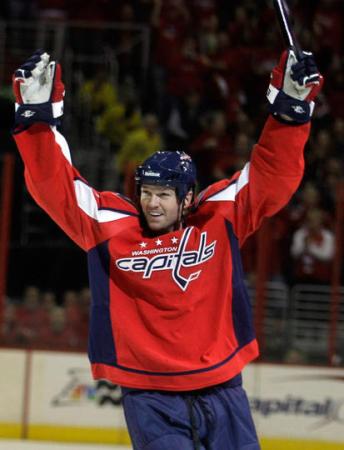 When the Washington Capitals acquired forward Jason Arnott from the New Jersey Devils in exchange for center Dave Steckel and a second round pick in the 2012 NHL Entry Draft, I admittedly had mixed feelings.

On the one hand, Arnott was a gritty veteran who had logged more than 1,100 regular season games and more than 100 playoff games since coming into the league in 1993. It’d be nearly impossible to last in the league that long without learning a thing or two about what it takes to be successful in the NHL.

But the other side of the coin wasn’t as pretty.

From New Years Day until he was traded to Washington, Arnott played in 25 games for New Jersey. During that span, he scored just four goals and three assists for seven points and was a plus four.

Sure, New Jersey plays a completely defensive-minded game, but after talking with friends who watch the Devils far more often than I do, they admitted it was tough to gauge just how much the old man had left in the tank.

He was essentially an old timer playing on New Jersey’s third line in the final year of his contract. He was good for 15 minutes a night and was picking up a point about once every three games. Nothing about his 62 games played with the Devils this season suggested greatness.

In fact, one could wonder if maybe the Capitals were higher on Arnott than anyone else out there simply because he picked up three goals against Washington in his first two games against them this season.

Maybe general manager George McPhee saw something in those two games. Maybe he simply wanted to keep another contender – like say the Pittsburgh Penguins – from acquiring him. Either way, GMGM pulled the trigger and the Caps have been on a roll since.

Sergei Fedorov (who was the last member of the Capitals to have logged more than 1,000 career games played) set the bar for grizzled vets, when he came to Washington he immediately made his presence known by picking up 13 points in his first 18 games with the Capitals.

Well, Arnott has two goals and three assists for five points and is a plus five in seven games with Washington, so he’s clearly on pace to match the industry standard.

In his first game with the Capitals, Arnott set up the game-tying goal against the New York Islanders March 1. The Capitals went on to win that game 2-1 in overtime.

Two days later, the 36-year-old picked up the game-winning goal against St. Louis. Seriously, it’s tough to make a bigger impact on your first two games in a new town than that.

And then, this past weekend, Arnott accomplished a feat very few of his teammates have been able to this season – he scored on the powerplay.

Playing the point position on the powerplay (a slot that even captain Alex Ovechkin has struggled in this season), Arnott took a feed from forward Alexander Semin and blasted a shot that deflected off of a Chicago defender and into the back of the net.

The Capitals are currently enjoying an eight-game winning streak – their longest of the season. Seven of those wins have come since Arnott was acquired and that’s no coincidence.

His arrival has helped the Capitals in more ways than one. For starters, the burden to score goals no longer rests with only the top line.

Arnott, anchoring the second line, has helped both Brooks Laich and Semin to appear on the scoresheet more often – with one of the two forwards involved in four of Arnott’s five points.

If the second line is producing, then opposing teams can’t only concern themselves with shutting down Washington’s top line. It also means coach Bruce Boudreau is able to roll all of his lines without having to double shift Ovechkin as often.

And let’s not forget, when the Capitals are more balanced, Boudreau is less inclined to tinker with the lineup, meaning guys can develop some chemistry with their linemates instead of having to double guess every other period who they’ll take the ice with.

Finally, Arnott’s biggest impact comes away from the game itself. Caps fans might not be able to see it as easily as the veteran’s numbers in the box score, but rest assured, Arnott’s lasting contribution to the Capitals comes in the form of his time spent with his new teammates off the ice.

How many times has Ovechkin already mentioned going to dinner with Arnott? How quickly did stories emerge about Arnott speaking regularly with Semin – an enigma most of us just assumed was too set in his ways to change his on-ice mentality?

Just knowing that Ovechkin is motivated to learn as much as possible from a sage veteran like Arnott should bring a smile to any Caps fans face. Arnott already has his name engraved on Lord Stanley’s Cup.

Ovechkin won’t rest until he can say the same. If that means picking up the tab on a few dinners in order to pick Arnott’s brain, then so be it. If that means suffering through some country music to learn what it takes to excel in the postseason, then he’ll manage.

So while Arnott very well could be a rental player who finds himself elsewhere after this season, there’s a very real chance that his veteran leadership could have a lasting impact on this team for years to come. And if that’s the case, then I will happily admit that I was wrong in thinking that the Caps might be better off without him.

[Update: My buddy Neil Greenberg, from a popular website known simply as RMNB, was kind enough to get stat geeky for me. It turns out Arnott has been on ice for 40 chances for and only 12 chances against. Along the same lines, Arnott has been on the ice for five goals for and zero goals against during even strength play. These numbers should prove to you without question that Arnott is worth mancrushing over.]

[Update #2: Mike Vogel, another friend of this blog, also chimes in on the subject, although his info wasn’t nearly as awesome as Greenberg’s stats. Turns out Arnott didn’t make the trip to Montreal due to injury and is now listed as week-to-week. Bummer.]