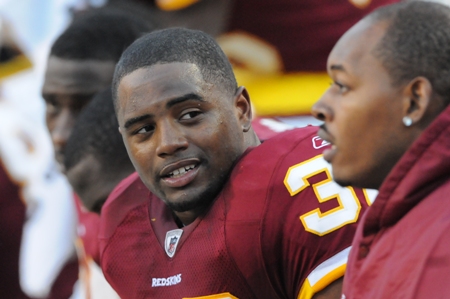 [Yesterday I gave you a sneak peak of my feature story in this week’s issue of Hail! magazine on Redskins defensive end Andre Carter and his unique friendship with Washington Capitals defenseman Jeff Schultz. In the same issue, we have a fantastic feature written by Joel Murphy on the bond between Redskins backup fullback Darrel Young and his brother David, who is currently deployed to Afghanistan. Here’s a preview of that story.]

By the age of six, Washington Redskins fullback Darrel Young already knew what he wanted to be when he grew up – a professional football player.

While some kids change their mind as often as the seasons change, Young never wavered on his dream of one day playing in the NFL.

Once she knew that her son had made up his mind, Geneva Young did what any mother would do – loved and supported her baby boy. To this day Young remembers the advice his mother gave him as he practiced day in and day out in his backyard: “Run the ball like your brother is chasing you.”

And by all accounts, being picked on by his big brother did wonders for Young’s football career. In addition to inspiring him to run harder, Darrel’s older brother David gave him the toughness necessary to realize his dream.

“A big brother is always going to be a big brother, so he bullied me around a little bit but it was just to toughen me up, never to hurt me,” Darrel said. “I’m thankful that I had an older brother that was a little rough with me.”

Darrel and David, who are seven years apart in age, had a typical childhood growing up in Amityville, N.Y. David would torment him from time to time, but he was also fiercely protective of Darrel if anyone else ever tried to mess with his little brother.

To this day, David is still the person Darrel looks up to most and the go-to guy whenever the 23-year-old needs advice.

“He’s the person I go to all the time for everything, regardless if it’s school, football, family, love life, whatever it is,” Darrel said.

While David was more outgoing and a bit of a comedian growing up, Darrel has always been more quiet and reserved. Even still, the brothers still have plenty in common – especially their love of sports.

David ran track and played basketball, two sports that Darrel also tried his hand at, but it was football that Darrel truly loved and excelled at. Watching his little brother’s games, David could tell Darrel was destined for big things.

“He would always stand out over the other kids. As a younger kid, he was always playing one age above,” David remembers.

When asked by his first grade teacher what he wanted to do for a living someday, Darrel didn’t hesitate – he was going to play in the NFL.

While Darrel dreamed of a life in the NFL, David had his heart set on pursuing a career in the culinary arts. He also had an interest in joining the military, so when he turned 18 he enlisted in the U.S. Army as a cook. His decision took the whole family by surprise, but Darrel was particularly devastated.

“I think I took it the hardest just because I was going through a transition from elementary school to middle school at the same time and I was trying to find my life out just in terms of football and stuff like that,” Darrel said. “So when he left, I did get his room and all the stuff he didn’t want to take, but at the same time, I lost my best friend.”

The two remained close, of course, and David actively followed his brother’s career – through high school, college and now the pros – from wherever the military sent him. David was also there last season to offer advice and support when Darrel, who was signed to the Redskins practice squad as a linebacker, was cut after just two weeks on the team.

“When they released me, everyone said, ‘You’re doing a good job. You’ll be back. It’s nothing you did,’” said Darrel, but he wasn’t entirely convinced. “They brought in another linebacker, so I felt like there was something I wasn’t doing.”

When times are tough, it’s always good to have a big brother to offer reassurance.

“I told him, ‘You’re going to make it to the next level, don’t worry about it,’” David said.

When colleges like Georgia Tech and West Virginia told Darrel he wasn’t good enough to play for them, he used it as motivation to push him harder during his career at Villanova. Likewise, when he was released from the Redskins practice squad during his rookie year, it only added more fuel for the fire.

“I always said if I got another opportunity, I would strive for my best, never give up and just fight until I have nothing left,” Darrel said.

The Redskins brought Young back this season, but on the first day of training camp, Darrel feared history had repeated itself when he came in and couldn’t find his name on the linebacker depth chart.