carter on albert: when is enough enough? 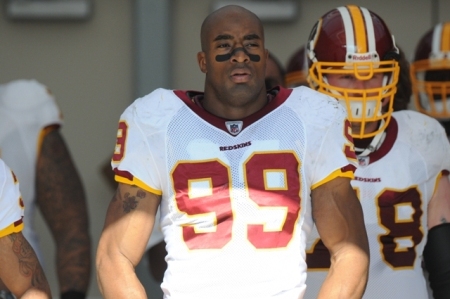 Look, it’s no secret that I’m a fan of Washington Redskins defensive lineman Andre Carter. He’s a proven NFL veteran who can get double digit sacks on the field and is also an ideal locker room leader who has shown throughout his career a willingness to make sacrifices for the good of his teams.

Two players immediately came to mind when head coach Mike Shanahan brought in Jim Haslett as his defensive coordinator with the intent of switching the Redskins defense from a 4-3 to 3-4 scheme – Carter and defensive tackle Albert Haynesworth. Both were established NFL commodities who had thrived in 4-3 defenses and neither player seemed best suited for the new defense being installed at Redskins Park.

Whatever issues Carter had with being asked to re-invent himself at 31, the 10-year pro has kept them to himself. The same obviously cannot be said about Haynesworth, who made headlines earlier this week when the team announced he would be suspended for Washington’s final four games of the 2010 season.

With that in mind, I reached out to Carter to get his take on the situation. I figured he, probably more than anyone else in that locker room, understands the situation and was interested to get his take on it all. We also had a chance to talk about Carter’s relationship with a former Redskins great and whether or not he’s willing to chalk this year up to being a lost season. Enjoy.

When the new regime and the new coaching staff came on board with the new defensive scheme, you and Haynesworth – who are both established NFL veterans I might add – were both asked to play out of your comfort zone. What was your mindset when all of this first started?

“It was never my first choice because, as you know, I did play the 3-4 in my fifth year in San Francisco,” he said. “History kind of repeated itself, but it is what it is. Playing in this league, you have to be a professional. You have to be accountable for the player that you are and your actions. I did the best I could to learn the position.

“Fortunately they saw that I am not a linebacker, and that I’m better suited as a defensive lineman,” Carter continued. “So, as you can see, I am in situational downs, which is always a tough pill to swallow because I still feel like I’m in my prime. I still feel like I can contribute more. However, this is the situation they put me in, so I just go out there and try to make plays the best way I know how.”

You and I talked earlier this season and you were telling me about your relationship with former Redskins great Charles Mann. Can you talk a little bit about that?

“I just think I wanted to get his perspective because we have such a good relationship,” Carter said. “We always talk about football, but we also talk about life. One thing he always says that I admire is, ‘You are what you are.’ This is your God-given ability. You’ve always excelled at placing your hand in the dirt. This is what you were destined to do. You’re going to try and learn more about the game and make yourself better, but at the end of the day, you know who you are.”

He’s been a visible presence around the Redskins this season – even traveling on the road with the team. What feedback has he given you throughout the season about your game?

“I think, with the position the Redskins put me in being a situational guy and everything, we just talk about pass rush,” he said. “He talks about my speed and says, ‘Man, you’re looking fast out there.’ He let me know he didn’t think I had lost a step. It’s good to hear that. I am 31 and guys my age do tend to slow down, but I think I’m doing everything like eating right, training well and taking care of my body so I can continue to be effective.”

While you’ve handled yourself throughout all of this as a true professional, the same unfortunately cannot be said about Albert Haynesworth. The entire situation has gotten ridiculous and as someone in that locker room who was asked to make the same sacrifices, I’m interested in hearing your take on his situation.

“I understand that the scheme doesn’t necessarily fit Haynesworth,” Carter said. “But, if I recall, he said the same thing last year when we were in the 4-3. He didn’t think the scheme fit him. It comes to a point when you ask, ‘When is enough enough?’ The coaches have tried to talk to him and ask what he would like, but they can only meet you so far. At some point the situation is going to change and they’re going to have to say, ‘This is what we need you to do. Are you going to do it or not?’

“In Albert’s case, I told him, as men, we’re all strong minded,” he continued. “You just need to make a choice of how you want to be remembered and what you want to do with your life. Do you want to be a professional or do you want to take the low road? All of this has had a domino effect, and it’s trickled down from the top.

“For Albert, I wish him the best,” Carter continued. “I tell everybody, I’ve never seen a defensive tackle with so much athletic ability. He’s strong as an ox. He can moves opposing players around. If he wants to, he could do that every play. But you’ve got to go out and do that every play. You’ve got to be motivated. Do I question his motivation? Sometimes, I do. I think fans do, some of the players do and some of the coaches do, but from what I’ve heard this isn’t any big secret. That’s been going on since his time in Tennessee and even perhaps as far back as college, so it’s just been an ongoing thing with him.”

It sounds like the proverbial straw that broke the camel’s back was when Haynesworth went to general manager Bruce Allen Monday night and told him he was no longer willing to speak to his head coach. I think it’s safe to say that something had to be done at that point. Would you agree?

“Yeah, that can’t work,” he said. “I just think the Redskins as an organization had to move on. Whatever drama was going on, you didn’t want the rest of the players to get sucked in to whatever problems Coach Shanahan and Albert were having. You needed to do something to alleviate the situation and I’m sure that’s what the organization was thinking when they decided to suspend him.”

Is this a lost season for the Washington Redskins?

“You know what, it’s tough to say,” Carter said. “The games that we’ve played this season that we quote unquote ‘Should have won,’ we didn’t win. But then again, we won some games against some teams that people didn’t think we could win. And we’ve had some rough games where we got our butts whipped. It’s been disappointing.

“People are asking, ‘Where does the responsibility lie – with the coaches or with the players,’” he continued. “I can only speak for the players in general. The Washington Redskins have always had talented players since I’ve been here. Probably more talent than most, but it’s about the desire, the will and the ‘want to.’

“Is the will there? Yes, but everyone has to pay attention to detail, stick to their assignments and go out and execute,” Carter said. “And that needs to happen on a consistent basis. That’s the only way to get to the next level. It’s a mindset. You’re going to win and lose some close games. That’s part of life in the NFL. But you’ve got to find a way as a team to maximize that potential. Up until this point, we haven’t.”