shanahan sheds some light on haynesworth 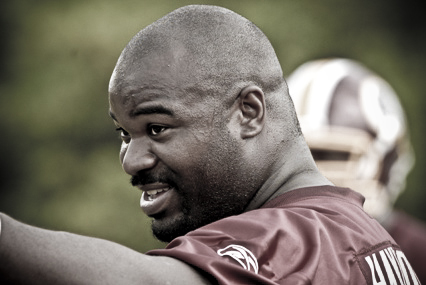 This is gonna take some getting used to.

For years, Joe Gibbs stood in front of a sea of microphones and masterfully said nothing of substance. In his best ‘coach speak,’ Gibbs would tell you how great that week’s opponent was and admit it was going to be a battle because his Washington Redskins were ready to fight their guts out. But as soon as he stopped talking, you realized he never actually said anything of substance.

Jim Zorn was wired differently. He would have happily told ‘Skins fans and the media anything they wanted to know. Unfortunately, he had no clue what was going on, so that never quite happened.

And then there’s Mike Shanahan.

Yesterday, when everyone was trying to figure out what was going on in the pissing contest between Albert Haynesworth and the Redskins, he did something no other coach in recent history has done – he told the truth. And he did so in brutal honesty.

“I will give you a little background,” Shanahan said. “When I first talked with Albert back in February and had a good feel how he felt, we sat down and talked with his agent. We let Albert know at that time that we would give him until April 1st to go to any team that he wanted in the National Football League. If he wasn’t pleased in playing defensive end, nose tackle, or any other position that we had for him that we’d let him take a look at any team that he wanted to go to.”

That sounds pretty reasonable, right? The coach had more to say.

“But, on April 1st, we owed him a check of $21 million,” Shanahan continued. “We said, ‘If you do take that check, we expect you to be the best defensive end, best nose tackle. If we play you at free safety, you’re expected to be the best free safety.’ Even though he’d have to lose a little weight. Whatever position we wanted to play him at, he would do the best job he possibly could, and make a commitment that he was going to be the best football player. Obviously he took the check, so I was surprised he wasn’t here today because I thought he did make the commitment once he took that check that he wanted to be a Washington Redskin. He wanted to do the best thing for the Washington Redskins to help our defense, and to help our football team win. And obviously, he didn’t go in that direction. I’m quite disappointed with him.”

That opening statement was the first real peak behind the curtain we’ve had in a long, long time. There had been rumors during the offseason that maybe the Redskins were shopping Haynesworth in a possible trade. Well, Shanahan came right out and clarified the situation. If Albert could find a new home, the Redskins would happily release him. They didn’t care about netting some huge return. They just wanted to drop the dead weight and build their team around folks who wanted to be here.

“We talked to his agent to let the agent know that you got about a month and a half to talk to any team you want to,” Shanahan said. “So those rumors circulating around the National Football League that we were in trade talks was really his agent talking to a number of football teams, and what teams may be interested in him, or what teams he was interested in joining, and obviously he decided to take our check, and we’re very disappointed that he wasn’t here today.”

While the team’s position has been known by Haynesworth since February, it’s now crystal clear to the rest of us.

If Haynesworth really hated the thought of playing in Jim Haslett’s 3-4 defense, then it was on him to find a new team to play for. But if he stuck around through April and collected a $21-million check, Shanahan and the rest of the new regime believed that meant he was on board.

“I’m very disappointed because he did have the ability to go somewhere else and we asked for nothing in return except not paying him the remainder of his contract,” Shanahan said. “He made $12 million his first year. We felt that if he didn’t want to be a part of us, that’s fine, if you want to go some place else that would be better for you and you want to play in that 4-3 scheme, but don’t take our check and then say, I don’t want to be a part of our organization. That’s what he did.”

One of the media members asked when Shanahan found out that Haynesworth wouldn’t be attending this week’s mandatory minicamp.

“I found out last night that he wasn’t showing up. First time,” he said.

Did the coach give any thought to reaching out to his disgruntled defensive lineman?

“I’m here every day,” Shanahan said. “I’ve been working every day as part of our offseason program. My door is always open for any player. You want me to go down there and chase him around Miami?”

Does this entire situation feel like a dark cloud hanging over the franchise?

Shanahan and friends have too much work as it is, rebuilding the franchise from the ground up, to worry about the one guy who can’t bring himself to show up for work. They’re installing a new offense, a new defense and working in a couple dozen new players. Wednesday’s practice, had it not been rained out, would have been the team’s 20th practice of the offseason. The majority of the roster has been around for each and every one of them. The only time Haynesworth comes up is when an outsider asks about him.

So where do we all go from here? Well, rumors are already swirling that the team will fight to make Haynesworth pay back the $21-million bonus. They can also fine him up to $9,442 for missing this week’s minicamp, although that hardly seems worth the trouble.

While it’s tough to guess how this situation will ultimately play out, it’s been a breath of fresh air hearing the coach be so open and honest. Like I said at the top, that’s just not something previous Redskins coaches have been compelled to do.

My best guess is that if Haynesworth was willing to give back that bonus, he would be a free agent tomorrow. The choice back in February was simple – the bonus or your freedom. A reasonable person would agree that their stance seems perfectly fair.

Haynesworth clearly wanted it both ways. Pay me and then let me play you. If he doesn’t give back the money, then it wouldn’t shock me if the team, led by Shanahan, doesn’t give him his freedom. Either way, this situation is far from over.