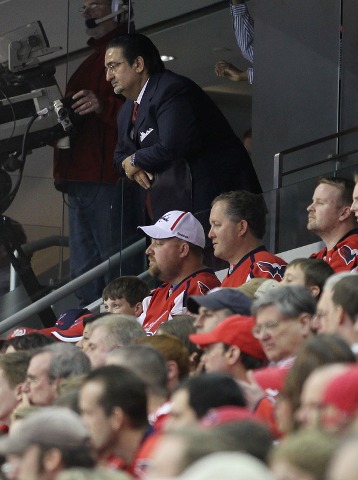 We double checked and it appears the NHL has declined our request to reinstate the Washington Capitals back in the playoffs. Although we’re devastated, we figure it would be more constructive if we turned our attention to the five biggest questions facing the franchise as they head into the offseason.

1. Does Alex Ovechkin need to change?

It’s safe to say this last year hasn’t gone according to plan for Ovechkin. Team Russia was an utter disaster. And then he caught flack for pushing a video camera away during some down time in Vancouver during the Olympic break. And there were the two suspensions. Finally, there was a first-round exit by his Capitals, who were leaps and bounds better than anyone else during the regular season.

So yeah, not good times for Ovechkin. If that’s not enough, now there’s talk that the reason the Montreal Canadiens did such a solid job defending Ovechkin is because he became predictable.

“Generally, you know what’s coming,” Canadiens defenseman Josh Gorges said in an interview with Elliotte Friedman. “When he comes in on the off-wing, he’ll try to step to the middle and shoot through you. You can bait him into that.”

“If you do go to the middle, he will try to go to the outside,” Montreal defenseman Hal Gill added.

Okay, for starters, Gill is an idiot. He’s basically admitting he shouldn’t have been part of the interview. A teammate says Ovechkin likes to come into the offensive zone by rushing down the wing with the puck, cuts towards the center and tries to fire the puck on net while using a defenseman as a screen.

We all know that to be true because Ovechkin has scored a thousand goals doing exactly what Jorges described. Gill jumps in and says, “Yeah. Or if you’re in his way, then he’ll go the other way.”

Of course he will. Where did you expect him to go? Backwards? Sideways? Just because Alexander Semin loves to curl back 40 times a game doesn’t mean Ovechkin will too. Not all Russians are the same, Hal. That’s profiling, and profiling is wrong.

Ovechkin skates fast and hard towards the net. If he can use a defenseman’s positioning to his advantage, he’s going to do so. The biggest knock we can put on Ovechkin is his lack of patience. There are times when nothing is there and he’s going to try to force a play anyway. But the guy is supremely talented and there are times when that’s enough to make something out of nothing. He’s got confidence in his abilities, so it’s nothing surprising that he’s trying to carry the team on his shoulders.

Boudreau needs to take a good, hard look at the footage of the Montreal series and decide if, indeed, his best player became predictable. If that’s the case, then he can determine if maybe it’s better for another player, such as Nicklas Backstrom should bring the puck into the zone.

Boudreau said that Ovechkin played four different positions on the powerplay during the series, so he’s obviously willing to tinker with things until he finds what works. There’s no reason to think he won’t be able to do the same with this.

If we were running the show (and be thankful that’s not the case), Semin would be gone. At this point, you know what you’re getting with him. Dude’s got mad skills, but he’s a head case. He finished seventh in the NHL with 40 goals, but his other hobbies include taking ill-advised offensive-zone penalties and a steadfast refusal to go anywhere near the net.

We chatted with one Capitals player last season who seemed convinced that Semin ignores his coach’s pleas to go to the net simply because he’s afraid of the physical abuse opposing defenders dish out. If that’s the case, then really, how can the Caps pay him $6 million next season?

Moving Semin and spending a portion of the newly-available salary cap space on free-agent defenseman Anton Volchenkov would absolutely be a dream come true (which is why neither will happen).

As far as Green, much of what plagues him is off the ice or between his ears. Why do you think he skipped out on the team’s final media session, only to have a change of heart five days later? He’s young. He’s emotional. He knows a section of the hockey-viewing world is overly critical of him and thinks he should play the game a different way.

Critics say Green should be moved to forward because he’s basically playing the position anyway. Or he should take skating lessons because he only skates hard in bursts. Or he should stop trying to score and focus only on defense. Seriously, you can say he’s a millionaire athlete and with that comes a price, but damn.

We’re not sure how anyone could focus on playing hockey when every “expert” with an XBox 360 thinks they know the game better than Green or Boudreau. And of course, they all feel obligated to share their opinion.

It’s funny, because now that the Washington Redskins have mercifully parted ways with quarterback Jason Campbell, Green is probably the most polarizing player in D.C.

Many love him and many more love to hate on him. At this point, the best thing Green could do is just tune all of the white noise out and focus solely on what his coach asks of him. He’s in the NHL because he’s an above-average offensive threat, so why change that? Sure, he can refine some of his positioning and technique in the defensive zone, but anyone who thinks Green should turn into Rod Langway is delusional.

Let’s all take a moment to remember he’s only 24 and that the Capitals are much better with him than without him.

3. Who will play center?

Here’s the list of centers who will be free agents this offseason: Backstrom, Belanger, Fleischmann, Gordon and Morrison. In other words, basically everyone but Steckel could conceivably be playing elsewhere next season.

Now, we’re convinced that Backstrom isn’t going anywhere. After Ovechkin, he’s the most important player on the roster. And truthfully, anyone else on the list could be back next year if the Caps still think they can be productive and they don’t try to break the bank with their next contract. But the Capitals definitely have an opportunity to completely revamp the center position this offseason.

Talented centers such as Keith Aucoin, Mathieu Perrault and Anton Gustafsson are all in the system. The Capitals have committed to playing youngsters John Carlson and Karl Alzner next season, so giving a few more minor leaguers a chance to shine wouldn’t hurt.

Morrison is likely gone and Belanger could be as well, unless he’s willing to take less money to stick around. We like Gordon, but even we have to admit that the 26-year-old’s back problems are troubling. Fleischmann is the biggest question mark.

Do the Capitals see the 42 goals he’s scored over the last two seasons and the steady increase in most statistical categories over that span and determine he’s well on his way to being a top-six forward or do they focus on his utter disappearance in the playoffs and decide to move in a different direction? It’s tough to say.

We wouldn’t be surprised if management’s position on Fleischmann hinges largely on his salary demands. If Flash wants to stay, he’d be wise to advise his agent to keep things reasonable when contract talks begin this summer.

4. Who is in net on opening night of the playoffs next season?

Chances are, Jose Theodore has played his last game for the Caps. That leaves Semyon Varlamov, Michal Nuevirth and Braden Holtby as the three goalies currently in the mix. Right now, that appears to be their order on the depth chart – Varlamov, Nuevirth and then Holtby. But should it be?

With the exception of Games 3 and 4 in Montreal, Varlamov didn’t exactly steal the show once he replaced Theodore against the Canadiens. In Game 7, the defense clamped down enough to hold the Habs to just 16 shots, and yet, Montreal scored twice. Our biggest complaint about Varlamov is that he’s prone to goals in bunches and while he is absolutely capable of the incredible, he’s also been known to allow a softy or two at backbreaking times. Consistency should be the biggest thing the 22-year-old focuses on this offseason.

Meanwhile, Neuvirth and Holtby continue to excel for the Hershey Bears. Unless the Caps feel compelled to bring in a veteran, the best thing they could do next season is invite all three to camp and let them battle. Varlamov will likely lock down the job, but there’s nothing wrong with giving all three equal footing. If nothing else, it will easily be the most intriguing competition next year’s team will face.

5. After such heartbreak, will Caps fans turn their back on this team?

Honestly, we’re shocked this is even a question. The folks who asked this are either looking for controversy where there is none or they forgot that the other teams in town all stink.

The Capitals, last time we checked, were selling standing-room only tickets during the playoffs. The core of this franchise is still 26 or younger. The system is stockpiled with even more talented youngsters, who anxiously await their chance.

The Caps, even after their disappointing early exit, are still D.C.’s only chance for a winner in the near future. They’re still the best ticket in town and easily the best gameday experience around. Fans will continue to come out and support this team next year and beyond as long as tickets remain affordable and the product on the ice remains competitive.

There’s plenty to worry about in the local sports landscape. This shouldn’t be on that list.