when is a goal not a goal? 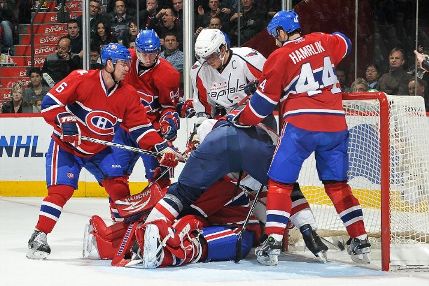 When it comes to officiating, there is nothing more vital than consistency.

Regardless of the sport, referees owe it to the teams playing the game and the fans watching the game to interpret the rules with consistency.

We bring this up because the defining moment of the Washington Capitals 6-5 loss to the Montreal Canadiens yesterday was a questionable disallowed goal.

With less than six minutes remaining in the second period, the Capitals looked to have scored a momentum-changing goal to pull within one, at 4-3. Caps forward Alex Ovechkin destroyed Habs defenseman Hall Gill, who crash landed into goalie Carey Price as the puck slipped into the net. Here’s the video:

In both instances, an offensive player hits a defensive player into his own goalie. In both instances, the play goes against the Capitals. When a Philadelphia player delivers the hit (in the playoffs, no less), the play is ruled legal. When a Washington player delivers the hit, it was initially ruled a goal and then waved off without any further explanation.

Folks wonder why Caps fans have some kind of inferiority complex and are convinced the world is against them. Well, we definitely don’t think this call intentionally went against the Capitals, but these are the plays that are turned to when those arguments are made.

If it’s a goal in 2008, then it should be a goal now. Unless the rules have been changed. And if that’s the case, we probably should have heard about it by now.The NFL changes their rules every time Tom Brady get a boo boo, but at least they have the common courtesy to inform us about it up front.