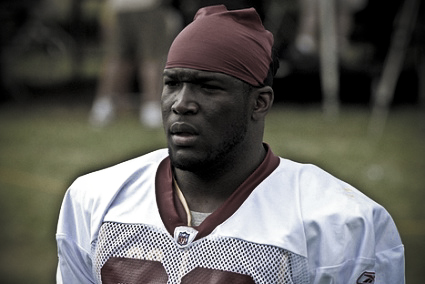 It’s quickly apparent to anyone who has attended the Washington Redskins’ 2009 training camp that linebacker Brian Orakpo is not your typical rookie.

While most college kids look out of place and hesitant as they adjust to the speed and tempo of the NFL game, Orakpo is seemingly leaps and bounds ahead of the standard learning curve, which is noteworthy because he’s still in the first week of his first professional training camp.

“You know, I’ll tell you, this young kid is going to be awesome at this level,” said offensive tackle Chris Samuels. “I’m working against him and he beat me a few times out there. I’m just trying to get back into the groove of things and he’s coming out fired up as a young pup. He’s going to be awesome, and I tell you what – I’m definitely glad to be working against him. He’s definitely going to help me get better.”

Wait a minute. We’re talking about Chris Samuels, a six-time Pro Bowler. And here he is, telling us that some rookie who just signed his first NFL contract less than a week ago is already so good that he’s making Samuels step up his game

Normally we’d take offense to Samuels comparing a Redskin to a Dallas Cowboy, but Ware did lead the league with 20 sacks a year ago, so we’ll let it slide. And on top of that, Samuels is on record saying Ware is one of the toughest matchups he faces in the NFL.

From there we opted to get a second opinion, if for no other reason than to make sure the heat wasn’t affecting Samuels. We decided to hit up the player we felt most qualified to evaluate Orakpo thus far – London Fletcher. Not only is he a fellow linebacker, but he’s also the quarterback of the defense. If Orakpo is truly worthy of such lofty comparisons, Fletcher would know.

Hey London, Chris Samuels is already comparing Orakpo to a young DeMarcus Ware. What say you?

“Personally he reminds me of Leonard Little, my teammate back in St. Louis,” Fletcher said. “They both have the same body types. They’re both about 6-3, around 250 lbs. and could rush the passer like crazy. He definitely reminds me of Leonard, and that’s a guy who has had a great career.”

So you’re saying he doesn’t really look like a rookie out there, does he?

“Yeah,” Fletcher said. “He’s got a lot of natural ability, so he’s come in and made the transition smoothly to linebacker. And when he’s had the opportunity to rush the passer, which he’s known for, he’s done great at that too. He’s definitely making the transition very well.”

You mentioned him playing linebacker and rushing the quarterback as a defensive end. The team is already asking him to play multiple positions and piling a ton of responsibilities on him, but he seems to be handling everything they throw at him. Is that actually the case?

“Yeah, that’s the case,” he said. “I’m sure when they did their due diligence on him, he showed the ability to handle a lot of responsibility. Otherwise they wouldn’t have given him so much so early. But he has a great work ethic and he’s a hard-working kid. He’s humble and he’s very talented, and when you add all of those things together, it can’t help but lead to success for you.”

DeMarcus Ware? Leonard Little? We didn’t want to talk to anyone else because we were afraid someone would call him the next Lawrence Taylor. We decided to head straight to the source and talk to University of Texas product, himself.

Okay, everyone we talk to says you’re already ahead of the game and that you don’t even look like a rookie out there. What’s really going on, man?

“That’s just how I am,” Orakpo said. “I’m just a hard-working guy who studies the game, loves this game and doesn’t want to use that excuse of being a rookie. You know, they’ve put a lot of responsibility on me, they’ve thrown me into the fire, and I’ve got to respond. That’s what everyone should be doing – they’ve got to study and make sure they know what they’re doing. Everybody’s going to make mistakes, so do it while giving 100 percent.”

We hear you, but you just got here and they’re already asking you to fill three or four different roles. Honestly, the only way we can tell you’re even a rookie is because you don’t have a logo on the side of your helmet yet.

Which is cool for you, since you were a Redskin in high school, right?

“Exactly,” Orakpo said. “You know we personified ourselves after the Washington Redskins and did everything exactly like they did. Then I went to UT and now I’m back to being a Redskin again.”

Seemingly every time we see you in one-on-one drills, you’re lined up against Samuels, a six-time Pro Bowler. What can you get out of working day-to-day with a guy like that?

Well, normally veterans don’t have much in the way of kind words for rookies, but he told us that you remind him of a young DeMarcus Ware. You’re from Texas. You know how good Ware is. What does it mean to you to hear something like that?

“That’s a huge compliment, especially coming from him,” Orakpo said. “Like you said, veterans do not like to give praise to rookies. For him to say that … that’s just a huge compliment and I really appreciate it. I’m just out here working each and every day, trying to get better.”

So have any of the veterans done any hazing or anything like that, yet? Have you gotten to sing your college fight song or anything fun like that yet?

“Nah, nah, it’s been kind of chill,” he said. “I’ve been carrying a couple helmets, but that’s about it.”

And that might be the ultimate sign of respect. Not only are they raving about Orakpo, but the veterans aren’t even messing with him like a typical rookie. Instead of hazing the youngster, they’re comparing him to the best the NFL has to offer. Clearly, bright days are ahead of the young linebacker and he’s more than ready to make a name for himself … just as soon as he gets that logo on his helmet. 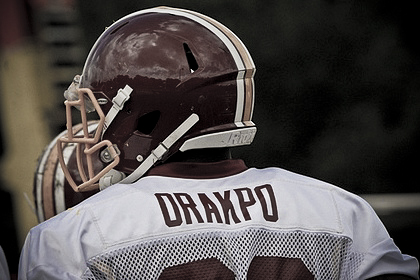