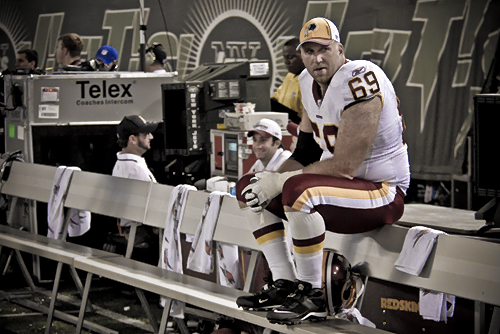 Okay, we want you to think of which current member of the Washington Redskins would most likely be in a Hollywood movie.

The answer? Reserve offensive lineman Jason Fabini, who is known throughout the movie industry as “Doorman #3” thanks to his memorable role in Made, Jon Favreau and Vince Vaughn’s 2001 follow-up to Swingers [Editor’s note: one of the best movies ever created].

“It’s the bar scene, when we let Screech and P Diddy into the club,” Fabini said when asked to describe his acting debut. He went on to say he shared the scene with “the guy from the Sopranos with the long hair,” who also goes by Federico Castelluccio.

For those not familiar, the plot for Made is fairly simple – two aspiring boxers, lifelong friends, get involved in a money-laundering scheme through a low-level organized crime group.

At around the 49-minute mark of the movie, Vince Vaughn and Jon Favreau arrive at a nightclub. There’s a long line waiting to get in which Vaughn essentially pushes his way through.

When Castelluccio informs them that they’re not on the list, Vaughn and Favreau try to name drop and talk their way into the club. Furio isn’t buying it and things begin to turn ugly when Dustin Diamond shows up and is immediately let in.

“Did you just let Screech in the fucking club,” Vaughn asks and then he tries to steal the list. Things continue to escalate until P Diddy shows up and gets them into the club. If you’re watching the movie, Fabini is in the beginning and end of the scene – standing behind Castelluccio and holding the door open for those who are granted access. It’s only about 45 seconds of screen time total for the 11-year pro, but it’s 45 seconds more than his teammates have.

So how did this all come about?

“A friend of mine who was friends with Vince Vaughn was staying at my place in New York,” said Fabini, who played for the New York Jets at the time. “They told us if we brought a suit, they’d put us in the movie.”

So this was a kind of “right place, right time” kind of thing?

Is this something you’d be up for doing again down the road?

(Laughs). “I wouldn’t go audition for anything,” Fabini said. “Yeah, if the opportunity presented itself and someone offered to throw me in a movie, then yeah. I mean, we did the movie in one night and then all went out the next night. I kind of liked the second part of it better.”

That’s it. That’s how an unheralded lineman lands a role in a Hollywood production (although someone needs to update his IMDB page). Fabini didn’t even get paid for the cameo, but it wasn’t about that for the big guy. As he said, he had more fun drinking with Vaughn and friends than actually being a part of the film. So naturally, we headed straight for the locker room to get his teammates thoughts.

“He was a doorman, that doesn’t count,” said center Casey Rabach, who was clearly familiar with the story and clearly unimpressed with said story.

We would have asked a follow-up question, but Rabach walked off laughing.

What do you think of one of your teammates, a fellow offensive lineman no less, landing a role in a movie?

“Good for him,” Jansen said. “I think they need more of us in Hollywood.”

Does he strike you as a Hollywood kind of guy?

You said you’ve heard the story more than a few times. What does it take to get him to share the story?

“Just ask him or even make reference to the movie and he’ll be willing to tell you,” Jansen said, still laughing.

If Fabini can do it, can you see anyone else in this locker room branching out and giving acting a try? Would you be up for it?

“Yeah sure,” he said. “I think it would be fun. It depends on the part and depends on what’s going on and how much they’re asking you to do but it would be a lot of fun to throw your hat in the ring and see what you can do.”

Not a lot of people know much about Fabini. What can you tell them about him?

“You know, Jason’s a great guy,” he said. “He’s a lot of fun to be around. He’s a great teammate and he’s always there to help support you with going over plays or talking about things like that. He’s just a fun guy to have around and a great teammate.”

And while very few people know about Fabini, even less know he’s been in a movie. In fact, outside of the offensive line, it seems no one was aware they were sharing a locker room with greatness.

“Fabini?!? Stop playing,” said fullback Mike Sellers, who said he’s such a movie buff that he goes to the movies at least twice a week. “Was he a bum?”

When informed that his teammate played the part of muscle at a nightclub, Sellers interrupted with “What’s scary about him?”

You don’t find him intimidating at all?

“I find him hairy,” Seller said, still laughing and trying to comprehend a world where Jason Fabini is an actor. “But intimidating? No, not at all.”

If we asked you to name 10 guys in the Redskins locker room who could be in a Hollywood movie, would Jason Fabini be anywhere near your list?

“That would be a hell no,” Sellers said.

So what you’re saying is they cast the wrong guy for the part?

At this point Sellers stopped guard Pete Kendall, who happened to be walking by.

“Don’t you think Fabini would play a good bum in a movie,” Sellers asked his unsuspecting teammate. Kendall, wanting nothing to do with our conversation, shook his head and kept walking far, far away. Just then, Fabini walked by.

“Hey Fab, come here man,” Sellers said. “You supposed to be some kind of enforcer-type guy?”

Fabini confirmed that he was, in fact, some kind of enforcer-type guy.

“I told him you would make a good bum, I didn’t know about enforcer though,” Sellers said, cracking up.

“The haters are coming out,” Fabini said as he walked away laughing.

“That’s cool though,” Sellers said. I don’t know how something like that could fall into his lap, but I’d love to be in a movie. I’d love to make fun of myself in some type of comedy. I can embarrass myself so easy, it’s not even an issue.”

The interview concluded with Sellers informing us that his teammate, from this point on, will hence be referred to as Jason “Hollywood Fabulous” Fabini. So don’t stress if the team fails to make the playoffs this year. They might not make it to the postseason, but at this rate, they’ll be coming soon to a theater near you. 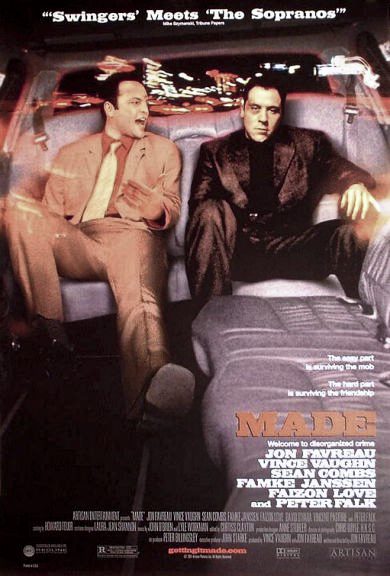