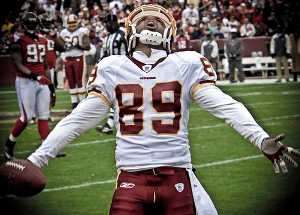 To help celebrate the launching of the new Homer McFanboy website, we’re having a fan-participation contest.

Let’s start with the prize, participants will have the chance to win one Hall of Fame John Riggins McFarlane collectible. Only 3,000 were made and they were available exclusively to those folks who were at the Hall of Fame weekend festivities in Canton, Ohio. I happened to pick one up at the Art Monk-Darrell Green ceremony, and figured I should share the wealth with one lucky Redskins fan. What do they have to do to win? It’s simple – just prove how big of a fan you truly are.

Here’s what we’re looking for:

Write a poem (100 words or less) about your favorite current Redskins player. The player has to be on the roster as of this weekend’s Carolina Panthers preseason game, August 23. So if you write about Joe Gibbs, Art Monk or Sean Taylor you’re not going to win. If you write about Daniel Snyder, Larry Michael or your favorite cheerleader you’re out too (although I’d be up for people emailing poems about Larry Michael any day). This is all about the players and why that particular player is your favorite guy on the roster.

Also, here’s a few helpful hints:
– Bonus points will be awarded for funny. That’s pretty self-explanatory.
– Bonus points will be awarded for featuring lesser known Redskins players (meaning a “Might Casey at the Snap” poem about Rabach will do better than 100 words on Clinton Portis playing dress-up).
– Realize that the winner’s entry will be posted on the site. So if you’re sending an entry, you’re giving your consent for us to post it.
– I’m not the only judge. If you don’t win and are mad about it, you should know in advance that I’m going to say I voted for you but was overruled by a panel of literary professionals.

And that’s about it. The contest starts today and runs for one week, so entries must be turned in by noon Friday, August 29th. To enter, just email us here. Thanks, and good luck.