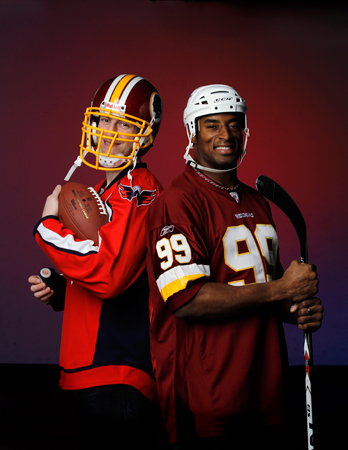 [As you can see, the 15th issue of Hail! magazine, our free digital publication dedicated to the burgundy and gold is now out. Here is a sneak peak of my feature story in this week’s issue on Redskins defensive end Andre Carter and his unique friendship with Washington Capitals defenseman Jeff Schultz.]

The D.C. sports scene is a tight-knit community, so it’s not uncommon to see star athletes such as Washington Redskins tight end Chris Cooley and Washington Capitals forward Alex Ovechkin hanging out during their free time.

Carter, who calls San Francisco, Calif. home, admittedly couldn’t stay upright on a pair of ice skates, and Schultz, who hails from Calgary, Alberta, Canada, has never played a down of football in his life. Yet, the two have become fast friends this year. They regularly attend each other’s games, and Carter, and his wife Bethany, and Schultz, with his girlfriend MacKenzie Keeley, hang out whenever possible.

The couples do lunch once a week and enjoy going out to dinner whenever possible. Their get-togethers have even included teammates such as Redskins defensive lineman Phillip Daniels and Caps defenseman John Erskine.

“It’s been a lot of fun,” Carter said. “It’s good to mix the two worlds together because, at the end of the day, we’re all normal people. We might do different sports for a living, but there’s a lot we have in common. And honestly, I’m digging the Canadians. They know how to have a good time and can definitely be hardcore drinkers.

“Okay, not so much Jeff, but John Erskine and his girl – they can throw down some drinks,” he said laughing.

And to think, this budding “bromance” likely never would have happened if not for a chance encounter during a charity event.

“We met at the March of Dimes fashion show,” said Bethany. “We were changing in the same changing room, and we were being girls. We got to talking a little bit…”

“And Jeff had mentioned to me that morning how he wanted to go to the Redskins-Cowboys game,” said MacKenzie. “He really wanted to go see that game and we didn’t even know how to get tickets or anything. I didn’t even say anything and Bethany pulls out a stack of tickets from her purse and invited us to come to the game.”

Since then, the four have been inseparable.

“Jeff reminds me a lot of myself when I was that age,” Carter said. “When I was younger, I was really quiet. Of course, I met my wife and she helped get me out of my shell. Jeff is kind of the same. He’s really low-key and humble, but he works hard. I’m anticipating down the road we’ll get him more and more to come out of his shell. That’s my goal – to get him to be a little more outgoing. He doesn’t know it yet, but that’s my mission.”

Prior to his friendship with Schultz, Carter wasn’t exactly someone rushing home to catch hockey highlights on the NHL channel.

“I didn’t know nothing about hockey,” Carter admitted. “I think I went to one Sharks game back when I was a 49er, but that was it. When the Olympics came around this most recent time, I really started to get into it. Since then, my wife started going to games, and now with Jeff, we try to go to as many games as possible.”

While it took Carter 30 or so years to truly appreciate hockey, his 3-year-old son Quincy fell in love with the sport almost instantly. In fact, he already owns multiple hockey sweaters and one of Jeff’s sticks.

“Andre’s been really good about letting us know if they have a couple extra tickets and we try to return the favor,” Schultz said. “I know their son Quincy is a really big hockey fan. When Andre asks him which sport he likes better, he says hockey.”

Schultz isn’t kidding. The Carters are pretty sure at this point that they know what Quincy wants to be when he grows up.

“My son is obsessed with hockey,” Bethany said. “You’d think being a football kid, he’d be in love with football, but he’s totally obsessed with hockey. So the moment he met Jeff and got to go to the locker room, that was it. He still talks about it at school to his friends and tells us to call Jeff. He even tries to sing the American and Canadian anthems. He’s completely hooked.”

With Carter and Schultz regularly swapping tickets to each other’s games this season, they’ve both gained a new-found appreciation of the other sport.