is haynesworth the voice of reason? 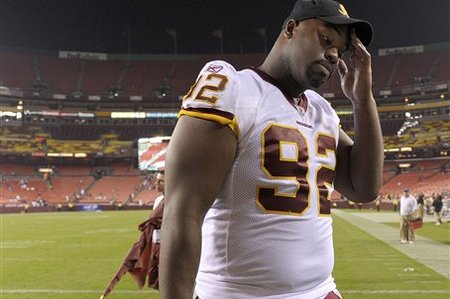 Since 1999, when quarterback Brad Johnson, running back Stephen Davis and receiver Michael Westbrook teamed up for the NFL’s second-best offense, the Washington Redskins have consistently failed to score points and rack up yardage on offense.

Conversely, the Redskins defense has finished in the top 10 in eight of the last 10 seasons. For better or for worse, that’s what Washington Redskins football has boiled down in recent history. The defense keeps the team in the ballgame and then it’s a question of whether or not the offense can do enough to win the ballgame.

Well, after giving up 30 points in back-to-back games against Houston and St. Louis, it’s clear something is not right with the Redskins defense.

You can point to the offense and rightly wonder why running back Clinton Portis seems to be falling down to avoid contact, or why receiver Joey Galloway is prominently involved even though he hasn’t been productive in years, but I would counter that the defense is held to a higher standard.

The offense, regardless of who is drawing up the plays or who is active on gameday, still can’t score consistently in the red zone. They still can’t put together time consuming drives to keep the Redskins defense fresh. They still take dumb penalties at the worst possible time.

But that’s what we expect from them at this point. Stephon Heyer isn’t very good, so when he’s in the game, you know an ill-timed holding penalty by Heyer is surely going to erase a key third-down conversion. That’s what happens when a below-average player is asked to play one of the most important positions in football.

For my money though, there’s nothing more troubling than watching the once-reliable Redskins defense fail to stop anyone. It’s one thing to give up yards in bulk to Matt Schaub and the Texans’ offense. They had the number-one passing attack in football last season and can score points with ease on anyone.

But it’s another story entirely when the Rams, led by a rookie quarterback and without the services of Stephen Jackson for half of the game, light you up. That’s when it’s time to panic.