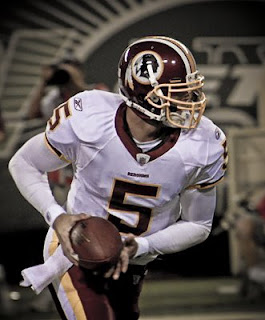 After the Washington Redskins surprising victory over the New York Jets, the game ball goes to an unlikely candidate — ‘Skins fourth-string quarterback Derek Devine. Why, you ask?

With a little bit more than three minutes remaining in the first half, Devine (who looks way more like actor James Franco in his NFL.com bio picture than should legally be allowed) dropped back on 3rd and 18 from the Jets 19-yard line and threw an interception. Redskins fans might not have liked Devine’s decision to stare down tight end Todd Yoder and get picked off by Jets defensive back James Ihedigbo at the time, but it’s because of that play that the ‘Skins were able to win the game and improve their record to 3-0 in meaningless preseason play.

Not following me? Keep up. We’ll get there.

“The Tasty Drink” Todd Collins was injured on the previous play, forcing Devine, the pride of Canby High School, into action. Instead of panicking, Devine stepped up and fired a telegraphed pass into the arms of Ihedigbo, who had exactly zero career interceptions prior to this play. Ihedigbo, who was clearly shocked to have the ball in his hands, then nearly lost the ball as he fumbled before recovering it again at the Jets 17-yard line. That’s when Jim Zorn and the Redskins coaching staff knew they had this game won.

Sensing just how this game was going to play out, Zorn had announced earlier in the week that he was altering his QB rotation. While ridiculous Redskins fans immediately held their collective breath in hopes that the next sentence was “Colt Brennan has been moved up to second on the depth chart and Todd Collins has been traded to Minnesota for Gus Frerotte,” the ZornStar had other plans.

Turns out he wanted Brennan to be the fourth string QB against the Jets. Not because he was disappointed with Colt, but because he wanted to see how Mr. Hawaii could handle running a two-minute drill at the end of the game. Once Devine lulled Ihedigbo and the Jets defense into a false sense of security, the table was set for the next chapter of “The Legend of the Colt.”

With 2:04 left to play, and the Redskins trailing the J-E-T-S JETS! JETS! JETS! (sorry about that) 10-6 in an uninspiring game, Brennan and friends sauntered onto the field to take over on the Redskins 20-yard line. First play – Brennan to wide out Billy “Brothers” McMullen for a 37-yard gain. After the two-minute warning, Colt hands off to running back Marcus Mason, who scampers for a 14-yard pickup. The ‘Skins go no huddle and set the final bait, as Brennan allows himself to be sacked for a loss of four yards.

On 2nd and 14 from the Jets 33-yard line, Brennan snaps the ball and … well, I’ll let Colt take over from here.

“I had two linebackers creeping, and I could see that the safety was off to the right,” Brennan told me after the game. “He wasn’t looking like he was really going to be covering someone and I knew they were going to blitz me. As soon as I got in there they were blitzing me hard, and we knew the blitz was probably coming. They came and my tight end came over the middle and luckily he was anticipating the ball. I kind of just threw it up there to just get the ball off. I didn’t throw a great ball, but the defender guarding him went for the ball and Jason [Goode] was able to bring it in, turn, and a guy missed the tackle. They had no one behind him because they had blitzed and we were able to get in the endzone.”

The one thing the classy Colt left out was that the defender who went for the interception and missed was, you guessed it … James Ihedigbo. It seems after getting his first taste of an NFL interception, he couldn’t help but go for it again. The only problem, Colt Brennan ain’t no Derek Devine. Ihedigbo passed up the safe play for the hope of a highlight and the rest, as the kids say, is history.

After the game I asked Goode, the rookie tight end out of Maryland, where this touchdown ranked on his career highlight list.

That’s when I asked if he realized that it was Brennan’s birthday, and that he had just given Colt a helluva gift.

“Oh is it,” Goode asked. “I guess I’ll have to get him another birthday present from friend to friend, from teammate to teammate.”

In the locker room I asked Brennan why no one else on the team seemed to know it was his birthday and was amused by his candid answer.

“I was afraid of what kind of hazing would happen to a guy on his birthday, so I tried to keep it hush,” said Brennan , who apparently isn’t familiar or very confident in coach Zorn’s no rookie hazing policy.

Either way it was the perfect answer from young quarterback who continues to improve. It’s becoming more and more apparent why Hawaii has fallen in love with this kid. If he keeps it up he too may one day get a game ball.

[Editor’s note: Matt Terl, the Redskins highly-talented blogger, writes in to shed some light on the topic of Brennan and rookie hazing. “Colt got his stuff talcum powdered at the home game, so he’s understandably skittish. Not sure why no one covered that, but there you go.”] 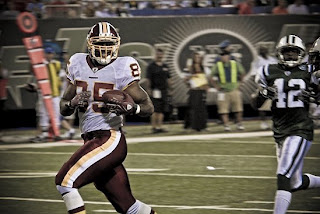