the legend of the colt 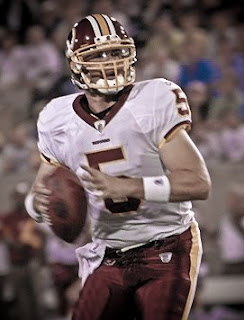 As previously noted, Redskins fans have quickly found a place in their hearts for rookie quarterback Colt Brennan.

Maybe it’s due to the fact he broke 30 records during his time at Hawaii or maybe it’s because he sounds like a kid who knows how to have a good time. Either way, ‘Skins fans are more vocal about Brennan than any team has ever been about a third-stringer QB.

When Todd Collins threw his first incomplete pass during the Hall of Fame game (on 3rd and 4 during the team’s first drive of the second quarter), more than just a few Redskins fans at Fawcett Stadium let it be known that they’d rather see Colt in the game.

By the time Brennan actually got onto the field, you would have thought Rudy was finally getting a shot to play for Notre Dame by the ovation he received. And of course, Colt had a strong showing — completing 9 of 10 passes for 123 yards and two touchdowns to lead the Redskins bench warmers to a victory over the Colts scrubs. I joked after the game that a couple more outings like this and the ‘Skins might have the first-ever back-up quarterback controversy.

Since he’s quickly becoming one of the most talked about players on the roster, I decided to track down Brennan to find out exactly what this kid is about.

Point blank – what’s the reason so many fans seem to be taking to you so quickly?

“I think people are really infatuated kind of with the fact that I came from Hawaii,” Brennan said. “That seems to be the focus of most questions and the most asked about thing. Hawaii is such a unique place and such an awesome place, and for me to go out there and have success I think people have been really excited about seeing something different. It seems like traditionally it’s about the SEC, the Big 10 and the PAC 10, and for me being from Hawaii, it’s different. People like different sometimes.”

What did you know about the Redskins before they drafted you?

“They always had one of the best franchises and fanbases in football,” Brennan said. “Ever since Mr. Snyder took over they’ve gotten a great reputation as far as being one of the best football franchises in the NFL, so I knew I was headed to the right place when I got drafted here.”

I know you weren’t pleased being drafted so late, but how fortunate do you consider yourself ending up here with a head coach who was a pretty good quarterback in his day?

“That’s kind of the silver lining, as far as the draft process,” he said. “I really meant it when I said all that really matters to me is where I end up, and I couldn’t be more pleased about the franchise and the team. We’re loaded with talent offensively. We have a great coach in Coach Zorn, and I’m just really excited about my opportunity. Coming in, people aren’t expecting to see something right away. They’re going to give me time to develop and I couldn’t be any happier with where I ended up.”

What kind of feedback have you gotten from the coaching staff on your throwing motion and your mechanics? Are they happy with everything?

“Mostly with me it’s been about my footwork,” Brennan said. “Getting the muscle memory back, especially after surgery and not being very explosive. When I first got here, he kind of touched on my release and wanted to see what he could do. But to be honest, as time has progressed and everything, he’s really kind of backed off that. He said, ‘All that really matters is that you get it from point A to point B.’ Guys in the NFL like Phillip Rivers, Vince Young and Tony Romo — some of those guys have lower releases than me and it hasn’t stopped them or deterred them from being successful.”

What kind of quarterback did the Redskins get when they drafted you?

He’s got the resume. He gets results. He’s already got the fans. Now, if we could just get him to stop sporting the visor …